I have often come across some anger and resentment towards farmer subsidy payments comments online radio TV etc. on why should farmers get tax payers money for nothing. And it might sound strange but for a lot of years I thought as a farmer myself that maybe we as farmers would be better off not getting anything and just be paid a fair price for the food we produce. We could do without the bureaucracy and red tape that comes from Brussels.

I could understand why people would want to leave the EU and have control of there own affairs and not have some nonsensical rules dictated to from somebody in an office in a foreign country who might never have set foot on a farm and have little idea of how the regulations’ that they are imposing will work in practicality at farm level.

When I think about the reasons for Common Agriculture Policy and payments from Europe and the price of food today the main reason for farm payments seems to me is in order to keep food cheap and to keep people employed. Not so much on farms but in factories supermarkets etc. There is so many employed in the food business today that it must be one of the biggest industries on the planet as its one thing that everyone needs every day and yet so many take it for granted. 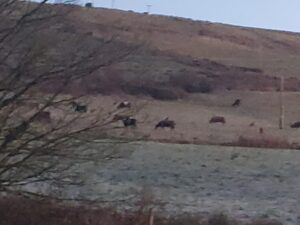 Food security is very important for any country in the world. Almost all wars and revolutions throughout our history have been over resources and the most important resource of all since time began has been food. Ireland s landscape is covered with the ruins of old ring forts round towers and castles all designed as a defense from raiding tribes trying to steal food harvests animals and property from each other.

You might ask what has that got to do with today well we are still the same people, governments are still fighting over control of resources like land oil gas etc. and people can put up with a lot whether war poverty homelessness cold but nobody will want to put up with hunger for long which is why in my view the market is being controlled to keep food as cheap and safe as possible.

If the market is not controlled it could lead to food shortages and food riots also the safety of food could be in jeopardy for example there are an awful lot of controls and regulations’ today involved in farming around food hygiene and tractability and controls on almost everything we do. Any breach of those regulations’ will result in sanctions and cuts to farm payments which would have a very big impact on a farmer who is relying on farm payments in order to make a living.

Without the threat of sanctions to payments the only thing to keep farmers in check would be new laws and prosecution through the courts which could be very costly to the state and very hard to prove. If food became scarce due to farmers leaving the industry because of lack of profit and prices went very high due to lack of supply how long would it be before food is sold on the black market.

That practice is already going on in my opinion with the horse meat scandal a few years back when horse meat was found in beef products in tescos. There are also cattle and sheep being stolen from farmers around the country every year which must be ending up somewhere either by falsifying documentation, or on the black market to restaurants or elsewhere with no traceability or controls at all.

When times are hard and there is easy money to be made you will always find unscrupulous people whether farmers, butchers, restaurant owners or officials. If food is too expensive for someone to buy to feed there family then they will buy whatever they can afford and it won’t matter to them where it came from.

It wouldn’t matter if the animal ever had a tag of if it was slaughtered with antibiotics in its system or you probably wouldn’t even know what kind of animal it was. If milk was sold without being pasteurized of water added or traces of antibiotics in it how would anyone know without the proper checks.

Despite my views as a farmer and even though there is a lot of unfairness around regulations’ equality and convergence of farm payments and who profits for the food that we produce we are better off as a society with controls in place.

Farm payments supports farmers to sell food at below the cost of production and can also be tailored to do more environmental good and is an easy way to control everything that a farmer does. It also helps keep food cheap and keeps thousands of people in jobs in factories research labs, warehouses, supermarkets everyone from truck drivers to accountants to civil servants benefit from controls on agriculture.

Most of all cheap food and food security keep the general population happy and the world a safer place to live but then again I could be wrong as I am just a farmer airing his opinion, (food for thought)