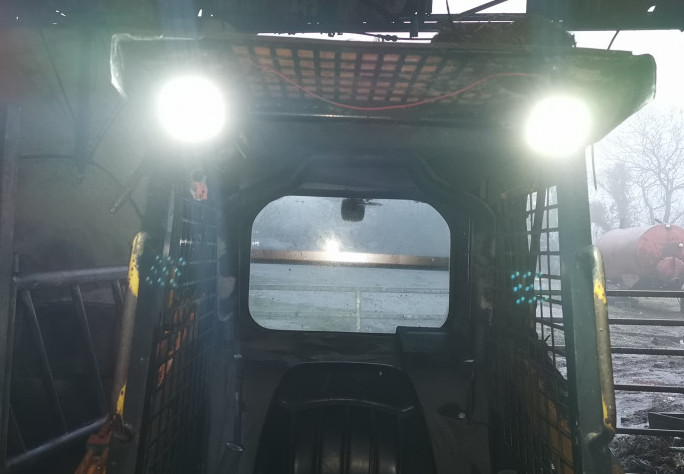 12 volt led work lights used on tractors or other machinery around the yard is getting more common in recent years. I think there is very good reason for making the upgrade mainly for more light and if you need to replace the lights or even just the bulbs it is not that much extra work to change the whole light.

I have 12 volt led work lights on a skid steer loader that I use for putting in bales of silage and it makes a big difference when I am working around the yard or shed on dark evenings. Led lights will last longer and give out more light than older lights with bulbs and they often work out a lot cheaper than buying the original replacement light. 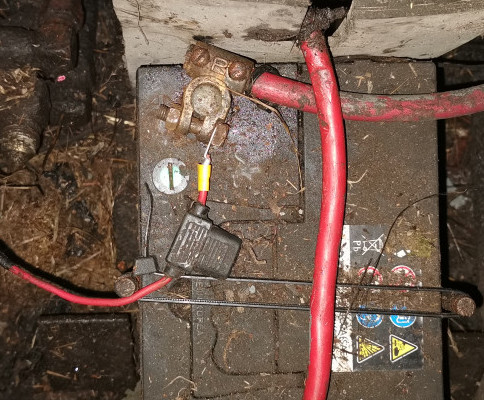 On my fermac skid steer it was wired up new as the old wires were gone and I am not even sure if it had lights to began with. The wiring was a simple setup with just a 12v fused wire connected to the battery going to a light switch. If you were just replacing an existing light then it is even simpler as the wires and switch are already there.

For someone who has never done any wiring before it is still a very basic task as there are only 2 wires on 12v lights an earth and a ground and with 12v spade connectors its just plug and play.

The lights I have on the skid steer are very similar to the these lights 3 inch square lights and they give out plenty light for any jobs around the yard. I have 2 on the front and one on the back. They give out a good white light and in my view are good value and very suitable for yard work like a loader mini digger of forklift.

If I was replacing lights on a tractor and wanted to keep the same size as the lights I was replacing for cosmetic or visual appearance then I would measure the light that I want to replace and order the closest size I could get to it.

An alternative to the square lights would be the 72w round lights which would suit many loading shovels or even older tractors with round lights. The angel light feature offers a dimmer light which gives out a good bit of light on its own. It would be a nice feature to have working in fog or around a house or garage at times you might want to reduce glare or brightness. I think the yellow halo would also complement loaders and diggers of the same yellow colour.

They are around 4.4 inches or 113 mm I am thinking of using them on a CAT 910 when I get around to doing it up. The main light is very powerful and bright at 72w It gives off a good white light that will light up any yard or field. You can switch between halo only full light only or both together. They are IP68 rated meaning they are waterproof and dust proof.

You can of course get lights without the yellow halo built in but I think they offer something different and the cost is much the same as the round plain Led lights.

At 10800 LLM work lights will be sure to give out plenty of light. They are around 5 inches by 3 inches and would make a good direct replacement for ploughing lights on tractors but could just as well be used for any off-road vehicle or as spotlights on a 4×4 for occasional off-road use.

Again they are dust and waterproof and give out 6000k white light which is the closest colour to daylight. I have seen some people replace headlights on tractors with Led lights but its worth noting that lights that can not dim would not be road legal as headlights. I guess that is why they are referred to as work lights. If you are not using the lights when traveling on public roads then there is no issue. The reason for that is they are much too bright for oncoming traffic.

Another option rather than replacing a number of individual lights would be to replace them all with a light bar. Light bars give out really good light as they run all the ways across with no space in between like you would get with single spot lights. To be honest if you want a lot of light then I think a light bar is the one to go for.

It is ideal if you are doing a lot of night work but the downside is if it goes faulty you could lose all of your light rather than just one spot light. Despite manufacturers claiming they last 50 thousand hours some do go faulty and who has time to be chasing up on warranty to argue that it was a product default rather than user abuse that caused it to malfunction.

That been said I think led lights are streets ahead of older type lights and bulbs and should last a lot longer too. My own experience of this is with trailer lights or trailer boards.

With older trailer boards and lights seemed to give me a lot of trouble with water or dampness getting into the lights. This I found very annoying as the trailer could be parked up for months and the day I would need the trailer to go to the mart or to pick up supplies in town I would find out that the lights no longer work.

I first tried led lights around 10 years ago and found them very quick to replace took me around an hour. The best part was every time I hooked up the trailer since the lights work although the plugs do still give trouble from time to time. I have found the Led lights to be a lot more reliable and waterproof and saved a lot of time trying to get lights working when I really should have been doing something else.

These are cheap and easy to replace and I would highly recommend them just be sure to wire it up correctly but colours of wires should be the same in most cases anyway.

While on the subject of being road legal tractors and working agri vehicles are required to have a flashing amber light fitted to the roof. I like this particular light not only because it is led and should last longer but it is also very easy to attach to the roof. With the magnetic base and 5 meters of cable it can be attached to the roof in seconds or taken off and stored away if you wish to do so.

there is no wiring up involved in this light as it simply plugs into the cigarette lighter or 12v plug in the vehicle. It is enclosed in a clear case and you really only notice that its an orange beacon when it starts flashing. There are slightly cheaper round lights for sale but I think this one is worth a little extra as it seems a well-made package.