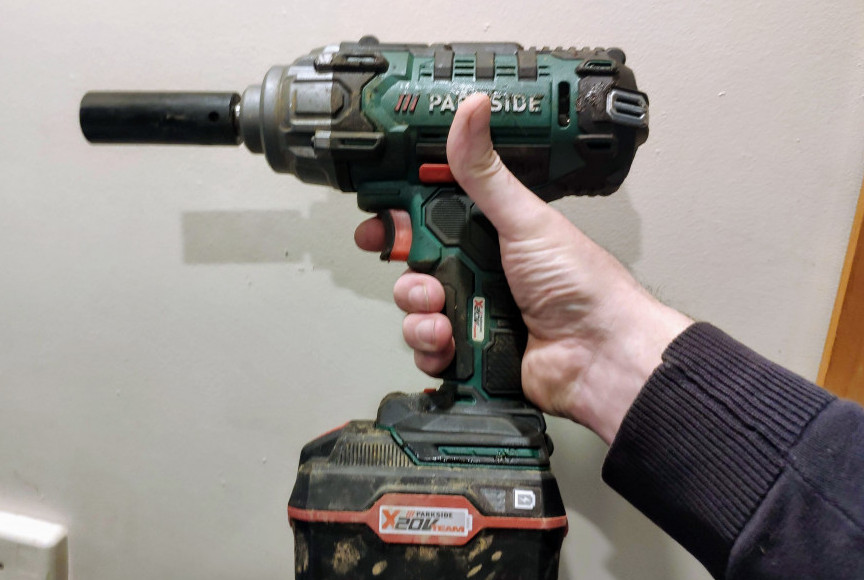 Around six months ago I purchased lidl’s impact wrench as I already had a drill and batteries and a charger in the same range of parkside tools. I originally felt a bit disappointed after having their drill and cordless grinder. On it’s first test which was to remove the wheel from my Mitsubishi outlander it failed to remove the wheel nuts.

If I did not have the other parkside tools already I would have taken it back and got a refund. Partly because it was cheap.  I told myself it might come in handy for something and party because I was too lazy to look for the receipt and take it back to the shop I kept onto it.

I liked the fact that you could change the torque settings with the touch of a button starting at 100 Nm and the highest setting of 400 nm was still OK for a mid range impact wrench even though it would not take the wheels off of my jeep. Over the past few months it has come in handy. I had no problems taking injectors out of an engine make quick work of taking off bolts and even used it to take a wheel of a skid steer loader to tighten the drive chains even if I did have to loosen them with a wheel brace first.

So would I buy it again the short answer is no. The reason I say that is it does not do all of what I need it to do and while it might be heavy and perfectly adequate for certain jobs personally I would like something with a bit more torque that could rip the nuts off a tractor if I needed it to.

For the price and the fact that I had batteries and a charger anyway it’s not that bad and I have seen videos on YouTube where it takes the wheels off of smaller cars. If I had to buy the parkside impact wrench and battery and charger I think I would rather save a little more money and buy something that better suits my needs such as the

The lanneret is not a well-known brand and I would usually tend to stay away from budget names that I never heard off. There is a lot of rubbish products on the market that are simply just a waste of money but if you are on a budget the lanneret is not much more expensive than the parkside but instead of a max of 400 nm the lanneret comes with 600 Nm of torque and a 18v 4 ah battery and charger to boot.

It also has a brushless motor and you have the option of buying a second battery at the time of purchase which I think is always a good idea to have one spare.

Talking about batteries I think it’s always a good idea if you have several power tools around the place to stick to one range or brand if possible. It will make it cheaper in the long run as batteries will be interchangeable and you won’t have a lot of different chargers and batteries around the place trying to figure out what fits what and what is charged and what is not. The ideal tool is the one you can pick up when you need it and it just works.

The DeWalt XR range are very popular and many people would have used their drills at one time or another. Their impact wrench I would consider good value and especially if you have a charger or batteries around from other tools in the 18v Dewalt range. This impact wrench has 950 Nm of torque and I would personally prefer this to the parkside or the lanneret impact wrenches.

I think this would suit my needs better and I also know that Dewalt make good tools this come in at a better price point for the power you are getting than any of the other well-known brands. It has 2400 impacts per minute and 1625 Nm of break away torque.

You just need to look at the amount of 5 star reviews this is getting on amazon to know that it is a top quality product at a very good price point.

The makita DTW 1001 would be a step up in power again but also a step up in price. Makita make some of the best professional tools on the market they also do cheaper tools and impact wrenches like the DTW 190 but at only 190 Nm you might be better off with the parkside from lidl. This DTW 1001 on the other has 1050 Nm of torque and a nut bursting torque of up to 1700 Nm.

Again if you have or are planing on getting other tools in the Makita range then the DTW 1001 would be a great choice. It comes down to the budget you have and what your needs are If you have to but the battery and charger that is going to cost you even more but Makita do make some of the best tools on the market.

The Milwaukee is again one of the best at making professional tools and they also have cheaper entry models but you will pay for torque and unless you are going to stick with air tools then this is probably one of the best battery operated battery impact wrenches on the market.

It has a fastening torque of 1356 Nm and a nut busting torque of 1898 Nm and this one in the link comes with a battery and charger. It is without doubt one of the best on the market but the main issue is the price and if it suits your needs.

While I would love to own this to me it would be a bit of an overkill as it is not a tool that I would use every day. If I was buying again I would most likely go and pay a bit extra for the Dewalt or makita but for the moment I will stick with the parkside I got in lidl and a breaking bar as It’s what I have for now.

If I was working from a garage most of the time rather than remote jobs around the farm then I would be tempted to but one of the compact air torque wrenches below as they have some certain advantages over the cordless versions.

The main advantage of air tools is you can get better bang for your buck as in more power for less money, What I like about the micro impact drivers is the compact size. If you are working in tight spaces under a bonnet or around an engine it’s handy to have something small enough to fit in there.

The Facom NS 1600 weighs only 1.3 kg but still has 800Nm of torque despite it’s tiny size of only 11 cm in length. The best part is the price is better than any cordless wrench putting out that much torque and it will fit in and work in spaces that most others won’t as log as you have a compressor and an air supply that is.

If you are hoping to use it out in a field hanging gates then it is not going to be much use to you but for a mechanic wanting something faster than a spanner for hard to reach places it is certainly worth considering.

There are other makes like the Hazet 9012M or the Chicago Pneumatic CP7732 Ultra Compact 1/2-Inch Impact Wrench which also has a very good name too but it would be hard to beat the Facom for power to weight ratio.

The Lidl’s impact wrench was an impulse buy and I don’t really regret buying it was cheap and I had spare batteries from the cordless grinder and cordless drill that I already had. It has come in handy in more than one occasion around the farm at various jobs.

In saying that for me the fact that it does not have the power to take off wheel nuts is a bit of a deal breaker and I would prefer to put the money towards something else even if it did cost a little more. The parkside will do most jobs fine like hanging a gate or small jobs on a car or bike but for the bigger jobs it simply does not have enough torque for me.