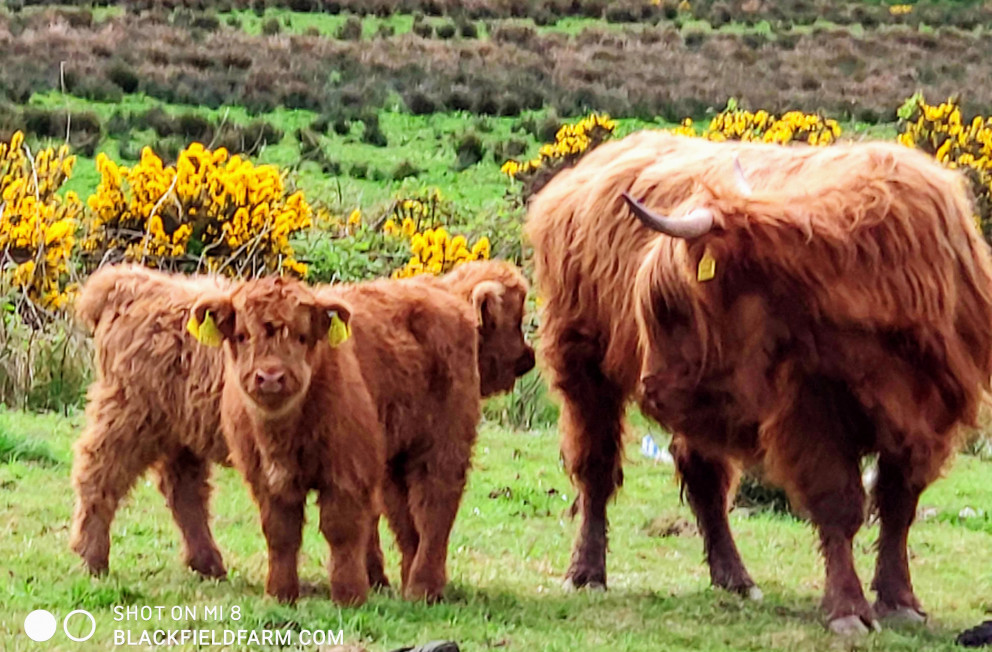 Highland cattle in Ireland today are still not a very popular breed. There are various reasons for this and the main one being over a long number of years there has been a push towards bigger continental type cattle. Breeds like Belgian blues, limousines, parthenais, Charolais, aubracs, etc. that have all become very popular.

There has been a drive to have cattle finished as young and as heavy as possible to try to meet the factories specs and age limits in order to try to increase the returns for the farmers. In order to do this it involves feeding large quantities of concentrates and cattle rations over the winter months.

The highland cattle on the other hand are a slow growing smaller breed of animal which would not reach factory weights as quickly as some other breeds. As one person reminded me one day the biggest part of them are their horns. I think the breed still has a lot going for it in this country though 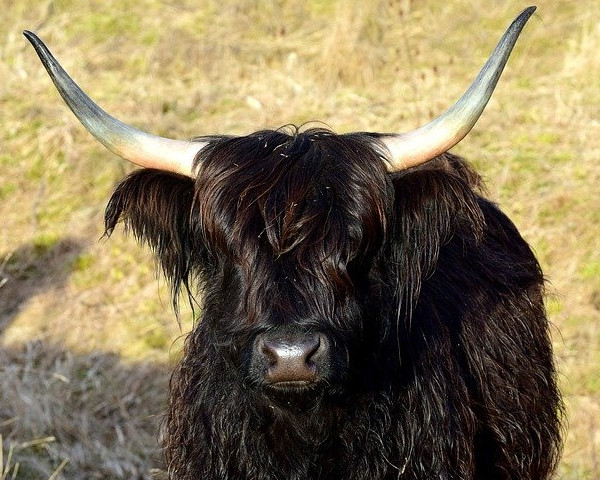 My reasons for keeping highland cattle

One thing I have noticed after keeping them with a number of years is they are an extremely low maintenance breed of cattle. They calve themselves without any assistance. They will forage where other breeds won’t for example while some breeds would be roaring at the shed for silage the highlands would be up on a bank of earth munching on a tree.

Because of their ability to graze where other cattle won’t and their ability to stay warm outside in cold weather means they are cheaper to keep over the winter. They also don’t need much else besides grass and silage. Like all breeds of cattle they will love to get ration too and would probably be better to at least let them know what it tastes like to stop them becoming completely feral.

I would have to question however if in today s market it pays to feed lots of concentrates or rations to cattle. The cost of wintering cows here can quickly wipe out any profit to be made. Maybe I am missing something but these stars on cows and schemes for breeding better cows seems to me only suits the factories and not the farmer. 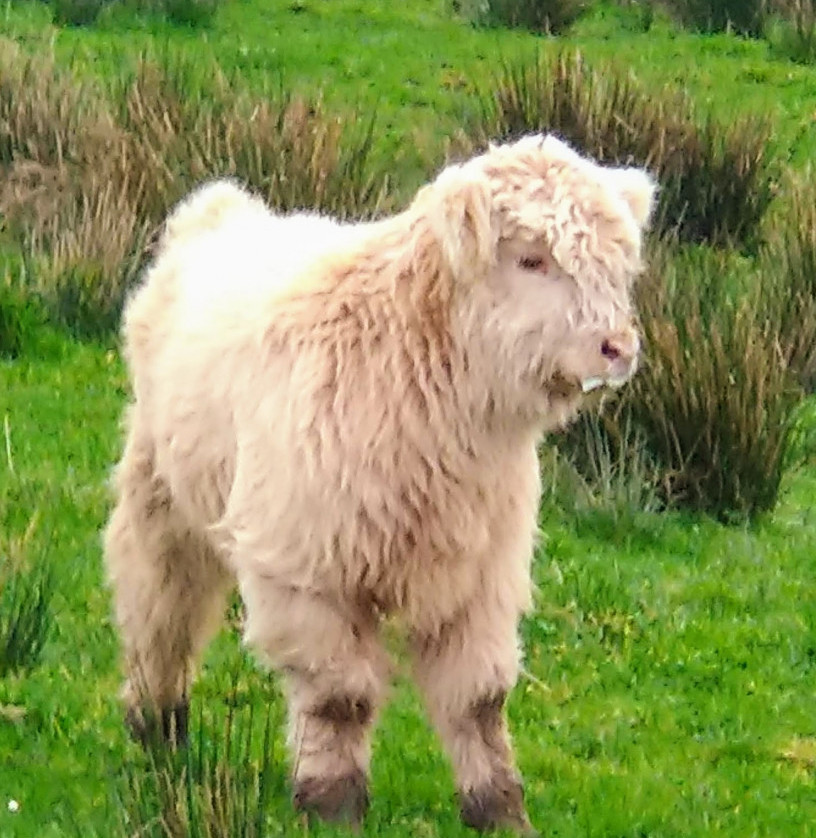 Surveys have shown here that without farm payments very few beef farms would have any profit for their work and indeed many would be making a loss. A good cow to me is not how big or good-looking she is, she doesn’t even need to win any beauty contests as long as she doesn’t cost me money and leaves me a calf every year I’m happy. In short, I want a cow that leaves a profit for me not for the factories.

For me the highland cows will do that once I don’t keep too many of them. (less is more) . By keeping the numbers at a low stocking rate particularly over the winter months the cost of keeping them is minimal. I still would make some silage but because they will do fine outside they only need to come in during very wet weather to prevent poaching of ground.

When they are inside they will eat less than larger breeds of cattle too and that means overall I would only need to make around half as much silage as I would if I was to keep some other breeds.

They are excellent mothers and are very protective of newborn calves and because there are not too many people breeding highland cattle Ireland female highlands are always in demand. Crossbreeds from highlands are nice cattle too and usually grow faster and bigger than purebred cattle.

Highlands are the oldest registered breed of cattle in the world their herd book describes two distinct types of Highland cattle in 1885. One was the West Highland, or Kyloe, originating and living in the outer herbides and lived in harsher conditions. These cattle tended to be smaller, to have black coats and, due to their more rugged environment, to have long hair. They cattle were named due to the practice of relocating them. The kyles are narrow straits of water, and the cattle were driven across them to get to the market. 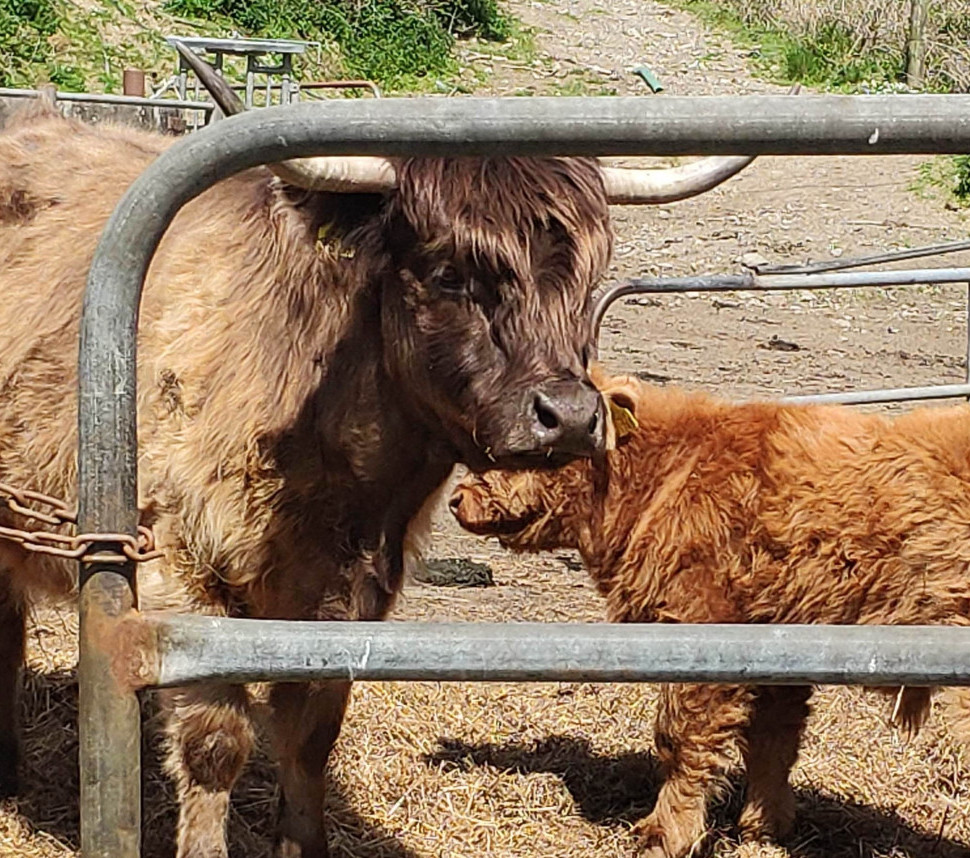 The other type were mainland cattle and these were bigger and lived on better pastures and generally had more nutrients due to better quality grazing. Today due to crossbreeding the two types of highland cattle have merged into one and there is no longer any difference in the breed.

Because they were bred and developed in the highlands of Scotland which can be one of the most inhospitable environments on the planet particularly in winter when storms of rain hail and snow blow in from the north Atlantic they are probably the most weather ready breeds in the world. Highlands have also adapted to survive on poor quality forage and will eat moor grass bushes and shrubs like heather.

I have heard it said that their stomachs have adapted to extract more nutrients from poor quality forage than other breeds of cattle. This would make them a very suitable breed for a lot of poorer quality land in places like connemara or the west of Ireland. 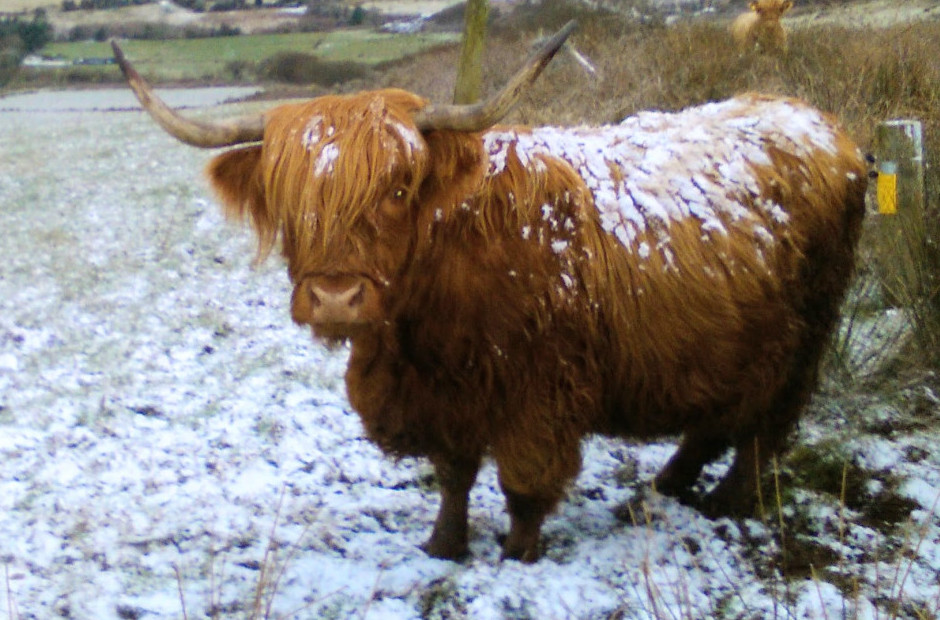 Normally people have kept scotch or blackface mountain sheep in these areas but like the suckler herd the market returns from wool and smaller hill sheep is not what it once used to be. I must admit I know little enough about mountain sheep only what I was told when I was considering getting some.

That was fencing was expensive and they were a good way to get to know the neighbors in that they could be in your neighbors land more often than they are in your own particularly when they are new and just been introduced to the area.

I decided then to stick with cattle as I felt I know more about them and for me highlands seemed to suit the high ground and mountain type ground that I wanted to graze. The lower fields I use for making silage and contract rearing of cows over the summer and Autumn months. 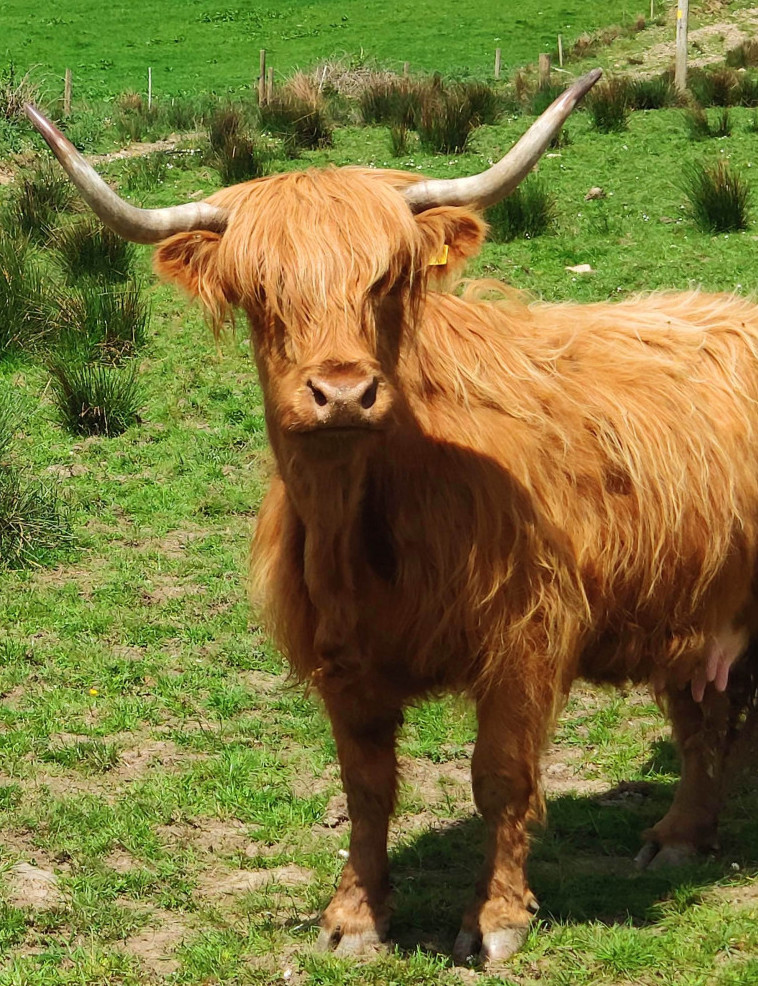 People often think of highlands of having a ginger or red coat of hair as most are that color but they can come in a wide range of colors including red, ginger, black, dun, yellow, white, grey, or tan.

Highland cattle have a double coat of hair, the outer oily coat has longer hair than any other breed of cattle and acts like a wind breaker stopping cold wind and rain. They also have a downy undercoat to keep them insulated against the cold and snow.

I have often observed my own out grazing in the middle of a field on the hill while other breeds are huddled at the ditch with their backs to the rain. Wind rain and cold weather doesn’t seem to bother them as long as they have some food to forage. The meat from highland cattle is lean and well marbled which is up to 38% lower in fat and 4% cholesterol than other breeds because with their thick woolly coats they don’t need as much fat to keep themselves warm.

Highland cattle are said to use their long horns to dig out buried vegetation in the snow although I thing most farmers including myself can find them a bit awkward to deal with. The horns can grow over 2 feet and that’s around 4 or 5 foot wide from the tip of one horn to the other. For that reason some don’t like going through the cattle crush or tight spaces.

The vet would deserve a medal for the annual tb test and you can’t just put them in a trailer and bring them to the mart either when you want either unless you remove the horns first. Although highlands are a docile breed their horns are formidable weapons and they know how to use them against other cattle to assume their dominant position in the herd. that’s another thing a group of highland cattle is called a fold and not a herd like other cattle breeds. 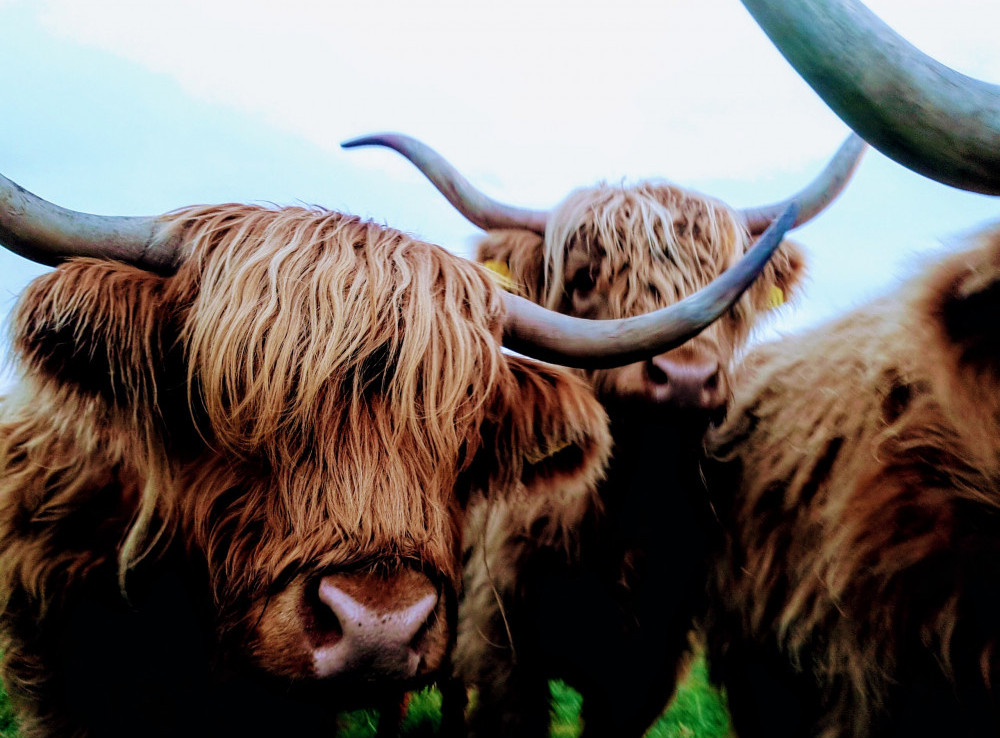 Watch out for the horns

Realizing my mistake I proceeded to throw the bucket over my shoulder and run out of the field twisting my ankle in the process. Although it wasn’t that serious and the cattle were more playful dancing and bucking around me it was still intimidating enough for me to change tactics and bring an empty bag and stand outside the gap of the field in the future.

Of course, they could always be dehorned as young calves but in my view that does spoil one of their distinctive features which is one of the reasons people buy them as they look so different than any other breed of cattle out there.

I would say dealing with their long horns is the main downfall of why the breed are not more popular than they are, the smaller carcass weight and weak demand for bulls and slower growth rates are also factors. The highland breed also has a lot going for it like very little health problems ease of calving, grazing ability and they also tend to live and last longer than other breeds of cattle. 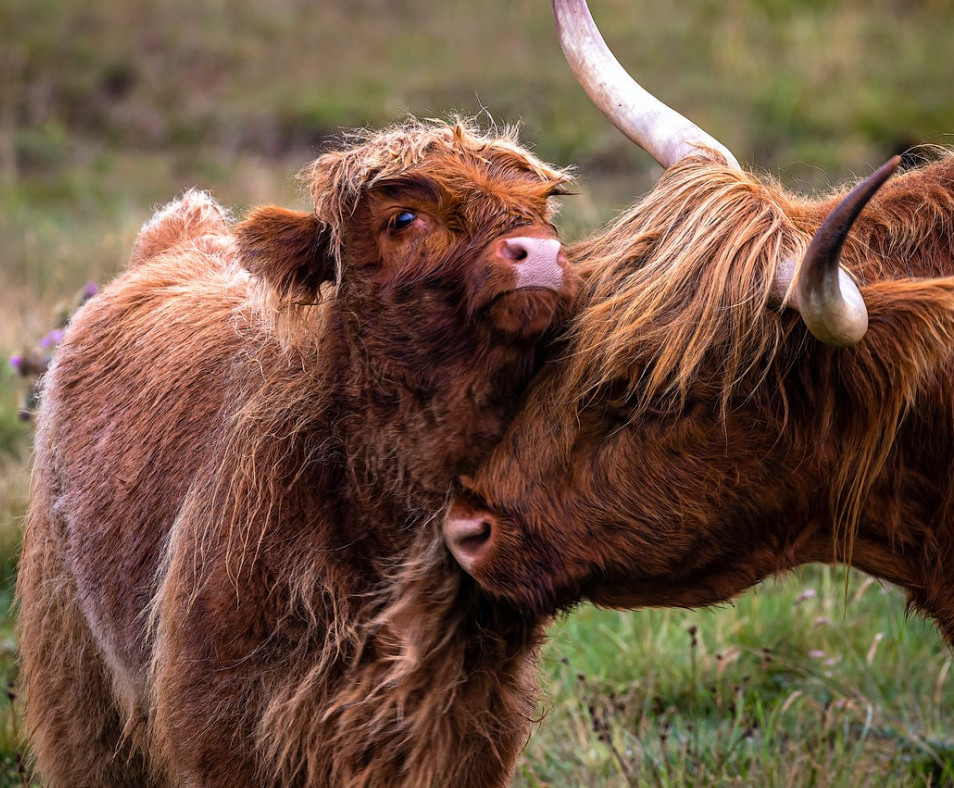 Highlands have good longevity and low replacement costs and can produce calves for up to 18 years. Calves are born small at around 30kgs with a woolly coat of hair that grows longer with age. They are on their feet and suckling very quickly and the highland cows milk is also rich and very high in butterfat which ensures that calves are sufficiently nourished in cold weather from an early age.

Highlands are very protective of newborn calves in my opinion even more so than other cattle. I tend to give them a wide berth for the first few days if I can and just let them get on with bonding. As the calf gets older the mothers relax a bit and that makes it a bit easier to steal the calf away for tagging etc.

Overall I would say the highland breed has some advantages and disadvantages but definitely has a place and in my opinion would be particularly suited to the harsh wind and rain along the western seaboard of Ireland. There is always demand for heifers from people who either want to get into breeding highland or who just want to keep a few novelty cattle. While bulls can be in less demand they can still fetch good prices as strong calves or at the factory when fully matured.

While I can’t see too many keeping highland cattle in Ireland in huge numbers I think they certainly have their uses in smaller herds of (folds) as they are known as in Scotland. 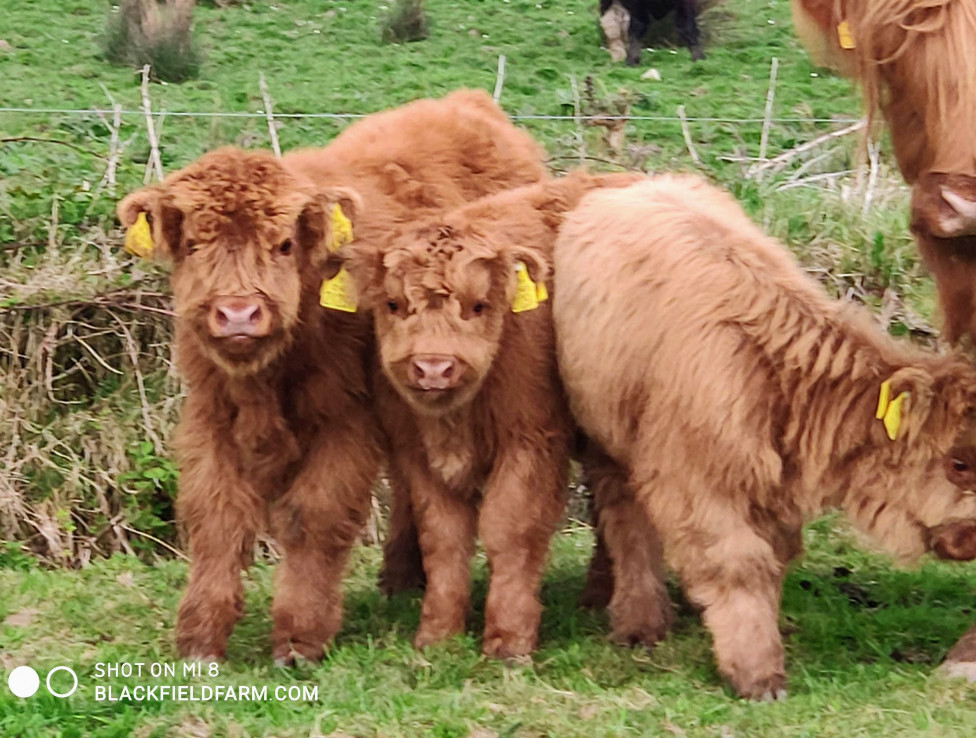 They make an ideal breed for grazing mountain or peat land as they will eat some plants that other cattle would avoid like brambles briars and furze bushes etc. but like any grazing animals will go for rich green nutritious grass first when its available. Because they are kept and cheap to keep over winter they could also suit many part-time farmers here.

That basically sums up how I have found the highland breed over the last number of years but if you want to know anything else about them you can get in touch with me or ask a question in the comment section below. You can also visit my highland cattle page here

30 thoughts on “highland cattle in ireland”