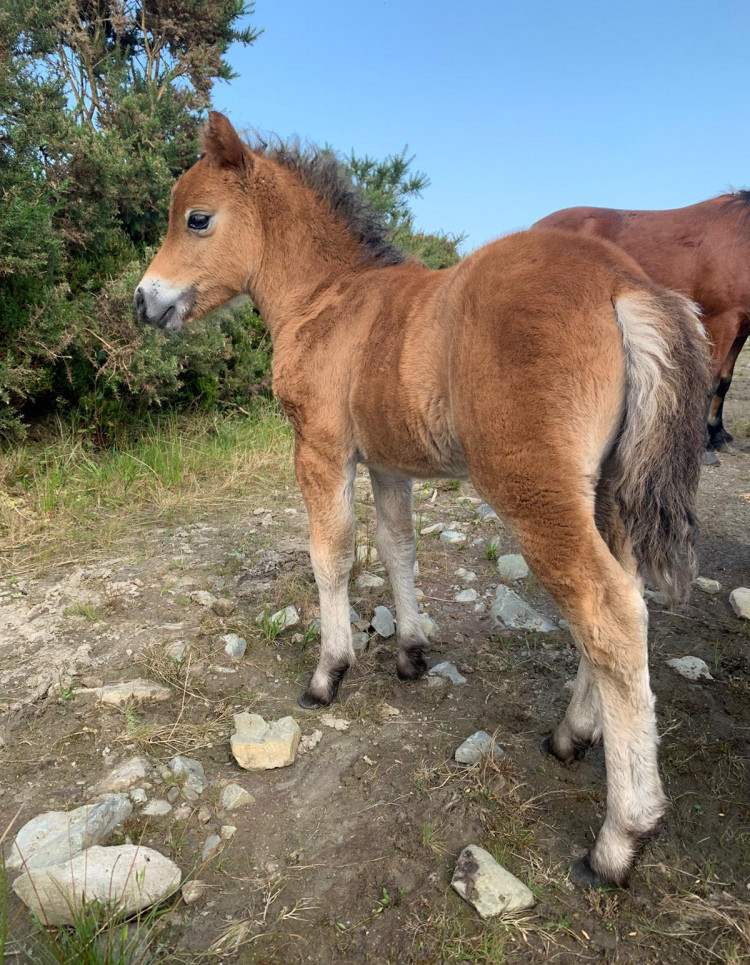 This is the story about My little kerry bog ponies

It is a tribute in a way to one of Ireland rarest and underestimated ponies as you might have seen under the animals tab we keep and sometimes breed Kerry bog ponies. Not for the gain of profit as many people see them as not fit for anything other than a child s pony but for their companionship and intelligence and to do our bit to help preserve the breed for future generations.

This story started a long time ago Ireland has always had a close relationship with the horse and even back as far as the iron age as far as 750 BC and the time of the spread of the Celts there are stories of warriors and raiding parties charging into battle in chariots pulled by small horses. Even harness pieces found from this period in the national museum of Ireland fit the Kerry bog ponies today. These early Irish ponies were around 11 or 12 hands high the same size as the Kerry bog ponies. 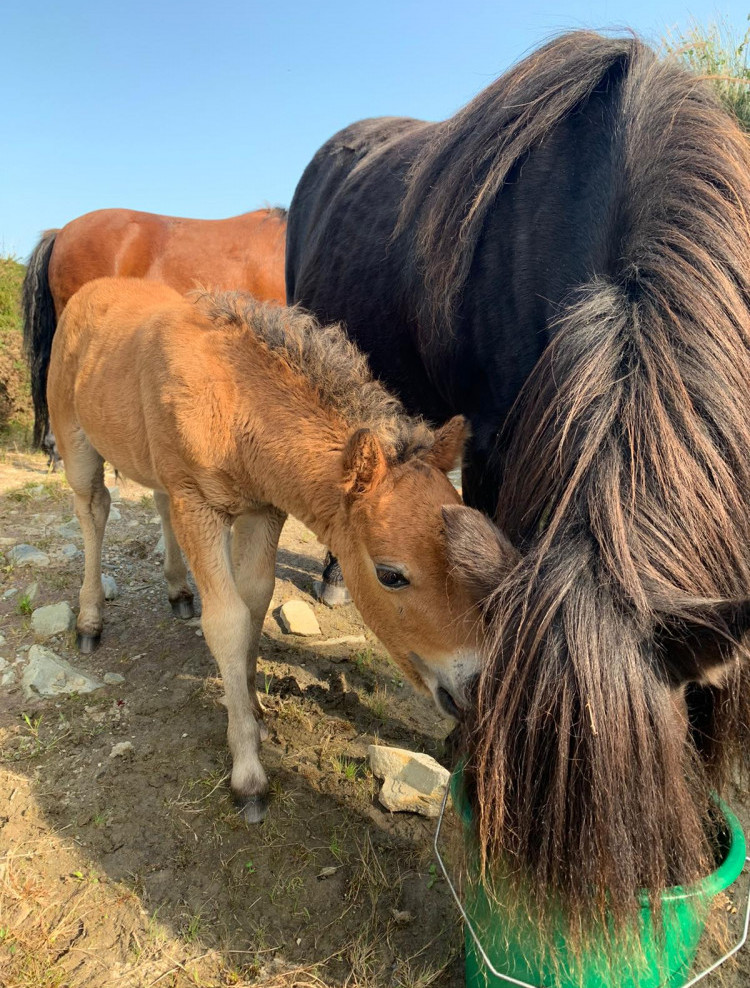 Bones have been discovered around the hill of Tara and newgrange which are from ponies around 11 to 13 hands high and although there were bigger horses they were not as common as they are today as they were a rear prized possession and a sign of nobility and wealth.

It is believed that the viking invasion here between 795 AD and 1000 AD has had an influence on the Kerry bog pony here too as it has been proved from DNA testing that there is a strong genetic link to ponies of northern European origins like the Icelandic horse the Shetland pony the Welsh or Exmoor ponies and other Scandinavian breeds.

It is not related to other Irish breeds like the Connemara which has connections with the Iberian peninsula and Spain. It is not known if the Kerry bog ponies connection with northern Europe has come in with the vikings as they are known to have transported ponies with them along their trading routes and settlements which they had on the dingle peninsula and in Limerick or if they stole them in raiding parties and took them back with them as the were a prized possession at the time. 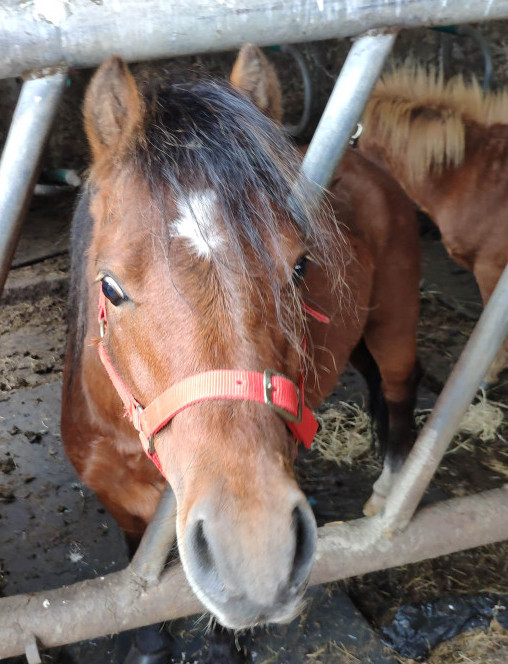 What is clear is there is a clear connection with other pony breeds of northern Europe and is also a distinct Irish breed of pony.

there is a mention of an Irish hobbyhorse from around the 13th century which is described as a small fiery horse around 12 hands high. They were so prized they were said to be a fitting gift for a king. During the 15th to 17th centuries at times the export of the hobbyhorse was banned from Ireland as there was such demand for them throughout Europe.

landlords at the time such as the duke of ormond and the earl of cork had stud farms on their estates that bred hobbyhorses. During this time it was illegal under the penal laws for any native Irish catholic to own a horse worth more than 5 pounds so horses were still only for the very wealthy during this time. It is said that the hobby went extent in the late17th century but if they did the name lived on.

There were several occasions throughout history when the Kerry bog ponies could have gone extent during the 16th century raiding armies took animals with them from dingle leaving Kerry almost denuded of animals. In the 18th century there is a mention of small hobby ponies from Kerry pulling sleds or (slembnain in Gaelic) and carrying loads across the cork and Kerry mountains as there were no roads there at the time to pull carts.

The cork butter market opened around 1770 and butter was brought across the mountains from Kerry in caskets known as firkins. The journey was said to have taken 4 days or more. Later roads were built along the tracks worn into the mountain side and these became known as the butter roads.

During the famine in Ireland horses and ponies again almost disappeared from most small farms a time when quarter of the population either died of starvation or emigrated. The new roads that were built to create employment during the famine also had the effect that the small sure-footed pack ponies were no longer needed as larger horses could now pull heaver carts along the road network.

It has been said that the small ponies still travelled across less well-known mountain paths but smuggling puchin an illegal Irish whiskey in an attempt to avoid the authorities at the time. 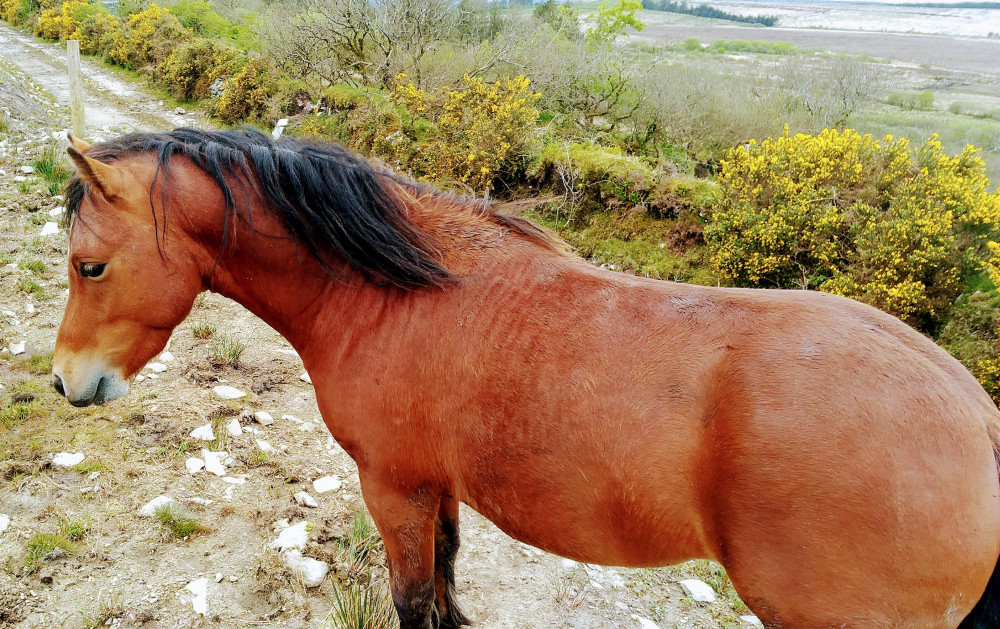 Here in Kerry I have often heard the name hobby being used by the older generation. Even my own mother spoke of past times in her younger days when they had a hobbyhorse on the farm. They were used for light pack work like bringing turf home from the bog or taking the cart to mass. Much of the same uses that the Kerry bog ponies were used for. We have to remember that the name Kerry bog pony is relatively new and has only been used in the past 25 years.

During the industrial revolution in the last century working horses and ponies were replaced by cars and tractors and equines were bred manly for sports such as show jumping, hunting or racing. This left little use for small ponies that had the same use as donkeys which were what you could call pack animals and they were in a way cast aside or left to their own devises.

The discovery of the Kerry bog pony 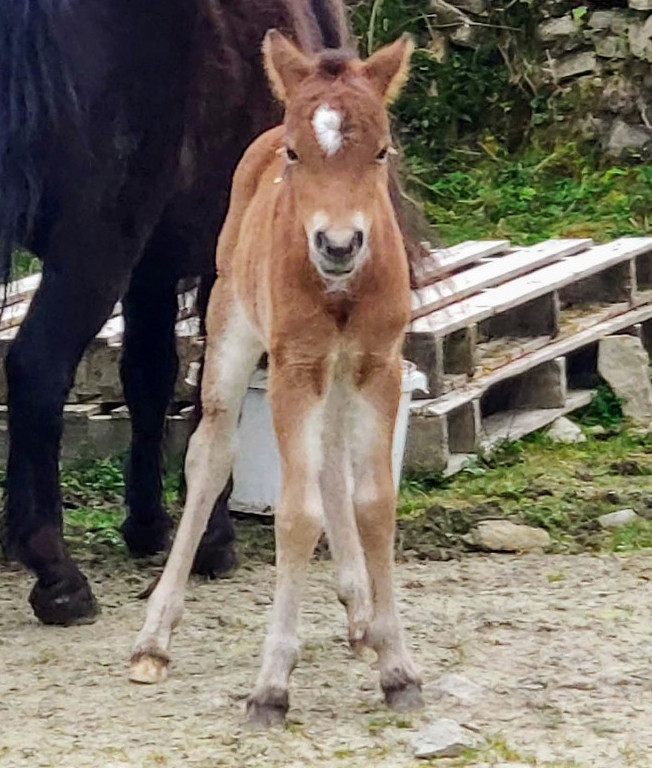 It was only in the 1980s a man called john mulvihill identified that the old breed of native Kerry pony may still exist. He heard about some wild small ponies that lived around the hills and mountains around glenbay where he ran a pub known as the red fox inn.

He went in search of these old ponies putting ads in local radio and news papers and sourced and purchased his first pony called bogman outside glencar in Kerry. bogman was mated with another small pony he found called Josie and they had a foal called Dempsey bog who was mated with a mare called purple heather and they had a colt foal called flashy fox who was born in 1992.

Flashy fox went on to cover many mares and is the father of our own stallion rusty rua.

In the early 90s John brought in the help of a vet ted clifford to identify the ponies and there unique traits. They then went about sourcing these ponies from fairs and private sales excluding ponies with Shetland or welsh traits. They were specifically looking for the characteristics of the old Irish breed like dempseys bog or flashy fox.

In 1992 the Kerry bog pony society was founded and they knew of 20 mares and 6 stallions in existence at that time. The approved ponies had there markings taken and were blood typed and were issued with black passports which were basically identification or information documents from 1992 to 2002 while efforts were been made to have the breed formally recognized.

progress was slow during this time and most of the sourced ponies did not have any breeding history attached to them, weatherbys DNA tested and worked on the characterization of the Kerry bog pony and on receipt of the genetic data the department of agriculture agreed that the Kerry bog pony should be recognized as an Irish breed.

Then studbook rules had to be drawn up with procedures for registration and classification. In 2006 the black passports were surrendered to the registration department of horse sport Ireland and new brown passports were issued in their place from that point on there were officially 3 native Irish breeds of equine the Irish draught the Connemara pony and the Kerry bog pony. 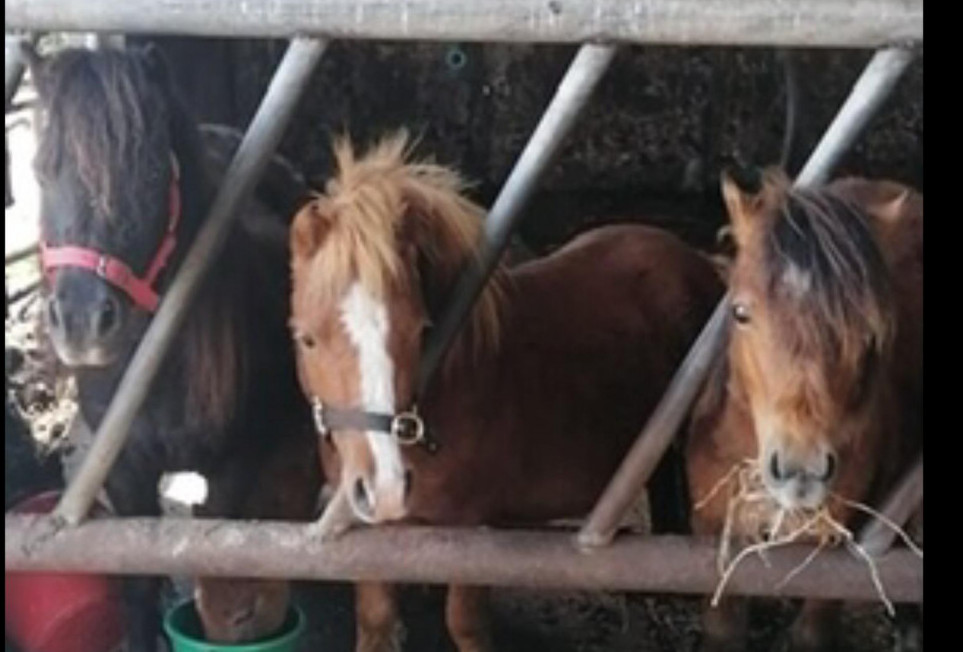 Characteristics of a Kerry bog pony

The Kerry bog pony is a powerful pony with strong bone and weight in relation to its size. They are sure-footed and well capable on soft or uneven ground. 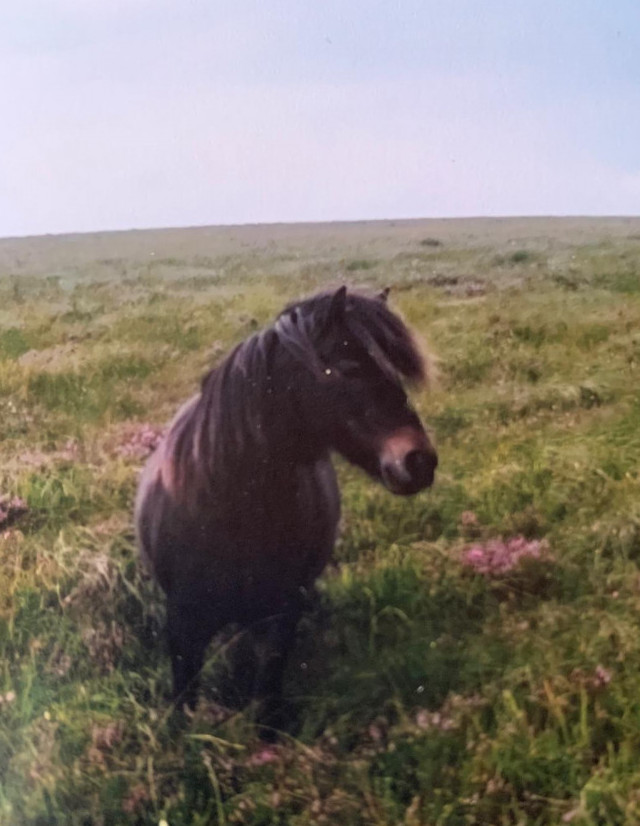 they have a dense long coat suited to harsh winter conditions and can be a range of colours dun,brown.black,bay, chesnut and Grey. Their head is pleasant and average for their size with a dish-face much like the Arab ponies. Their jaw is strong and well-formed with strong teeth for grazing heather and gorse. The ears are short and well pointed.

The neck is strong and medium length with well-rounded muscular shoulders and a strong compact body. They have a deep chest and a good girth. Powerful loins and hindquarters with a full abundant tail that is well set and carried.

The Kerry bog pony has a kind Temperament and character and I think its important not to understate this in the years that we have owned them I have never known friendlier animals they always come to greet us they are very well-mannered but also courageous and have good endurance.

how hardy are they

This in my opinion comes from thousands of years of working and living on the poorest of land and soil types on the edge of Europe facing the Atlantic ocean. 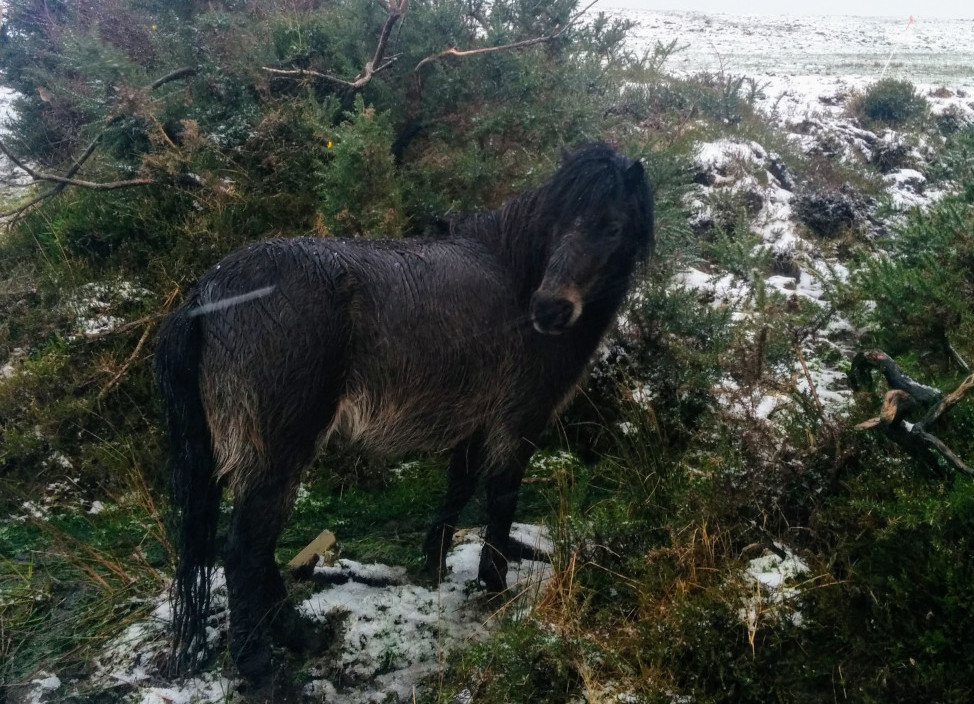 Ireland has cold wet winters anyway and Co. Kerry due to its position surrounded by sea and mountains gets the highest rainfall levels in the country. Living outside hear as an animal with all the odds stacked against you it is amazing that the Kerry bog pony has not become extent like so many other animals.

They have survived despite the odds because its in their nature to be resilient. Keeping highland and belted Galloway cattle I can honestly say that the Kerry bog pony will thrive where even the hardiest of cattle will struggle. This is partly to do with their genetic make up but also their ability to graze tighter than cattle and will also eat plants that cattle won’t. 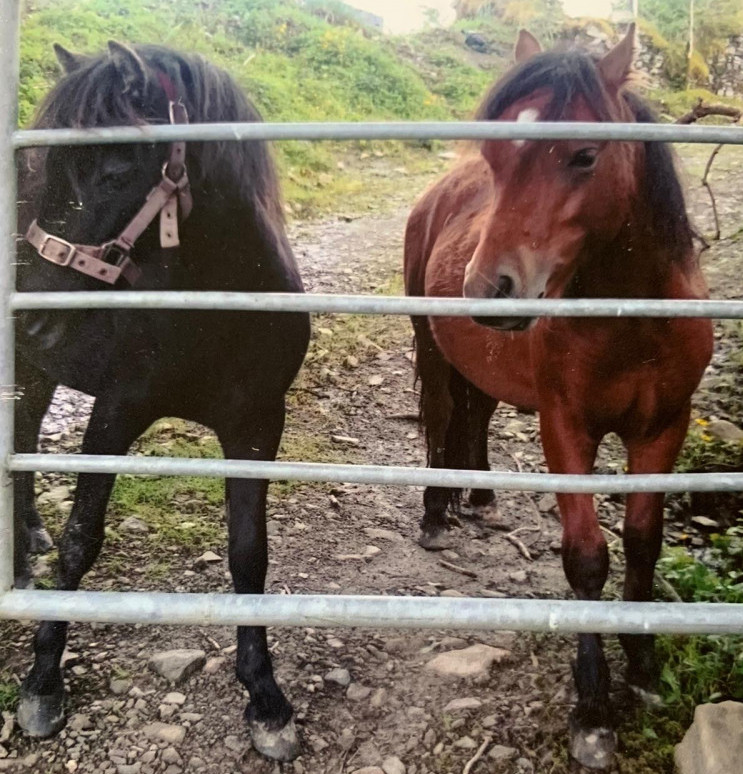 They keep on condition easily but can get overweight during summer if grazing rich pasture. Their number have now gone from 20 to between 300-400 and have been exported to the united states and many other countries around the world.

While some might see my little pony as being too small or good for nothing they are to me one of the most amazing friendliest resilient animals on the planet.