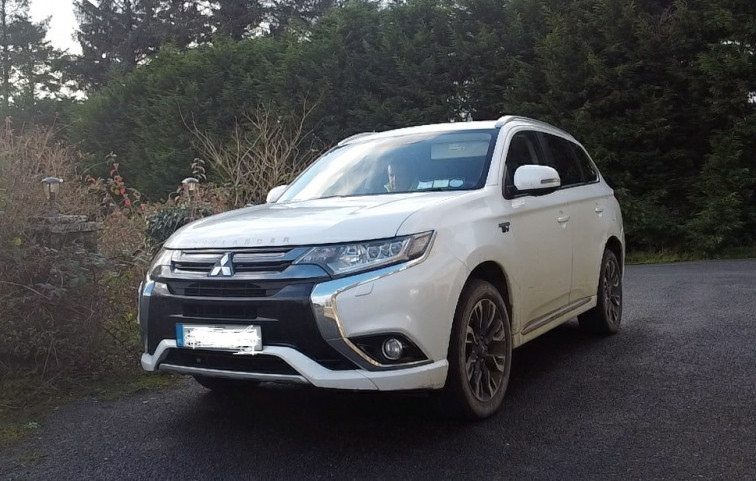 My Mitsubishi outlander hybrid review. If you are thinking of going electric on the farm and ditching the old diesel then this article might be of some use.

I am driving an outlander PHEV with just over two years now and think I have tested it out fairly well in that time. I was initially slow to change from diesel but after doing some reviews of my own I decided to take the plunge. The outlander can be charged with the supplied cable from any 3 pin socket which I was initially doing but after a few weeks I purchased an outdoor charger from eBay for around 150 euros.

The outdoor charger was mounted to the outside wall of the garage and as well as being more convenient it also charged slightly faster than the supplied charging cable. Not that the time made that much difference to me anyway as it is mostly charged overnight.

the electric range after charging is pretty crap and although the dealers will tell you that it’s around 40 miles the real world range is more like 20 miles but the crap miles on electric shouldn’t put you off either as most of us don’t put up that many miles on a daily basis anyway. Personally if I had enough to do a school run and a trip to town during the day then that would do for most days.There’s always the 2 liter petrol engine that will kick in beyond this which will carry you another few hundred miles.

One other bad point is the ground clearance is a bit low because of the battery stored under the floor of the car which might not be the best for rough off-roading.

While the outlander is not going to have the towing capability of a Toyota landcruser of a land rover discovery it still has it’s place for an odd trip to the mart of for moving a couple of cattle or sheep. It would defiantly be a step up from a car like a Volkswagen passat as it does have 4wd a long wheel base and good traction control. It doesn’t have a low gear box but being electric the speed and power are controlled buy the accelerator pedal.

I would put it’s towing capacity in the same category as some smaller SUV like the KIA sportage or Toyota rav. Where the outlander PHEV wins outright though is it’s comfort I think it must be one of the most comfortable jeeps that I have owned. Even after a long drive of a few hundred miles I would have no stiffness or back pain getting out of it.

It is by far the quietest 4×4 that I have ever driven too so much so that I have become accustomed to people stepping out in front of me when driving at low speeds followed by a jump of shock when they spot me and a look of where the hell did you come out of, which I always find a little amusing if I am honest.

At high speeds on the open road it is still hard to hear the engine running over the noise of the wind and tire roll and even then the cabin is still very quiet and comfortable. Only maybe when climbing a steep hill would you really take notice of the engine roaring into life. The one thing to watch on an open road or motorway is you can easily be traveling at a higher speed than you might think.

The fuel economy is hard to judge and really depends on how you are driving and would be almost impossible to put an average figure on it so I will just put it this way. If you are traveling long distances or lowing trailers with livestock or heavy loads then it’s a guzzler on battery and petrol but if you are just doing a school run or an odd trip to town then it really is a miser on fuel and they won’t even know you at the local fuel pumps as you might only be calling once every few months.

It really is that hard to judge the fuel economy that if I had to try to put a figure on it I would say between 15mpg and 200mpg depending on what you are doing. The power on the open road is very good for a 4×4 too especially if the battery is fully charged and you will notice the 200hp kick in when you hit that accelerator pedal and the battery and engine are working together.

So to sum it up I would say if you are going to be doing a lot of towing and work on a weekly bases then maybe stick with a landcruser or similar diesel 4×4 with a bigger engine and more torque. If you are doing long commutes or motorway miles I would say to consider it as while it won’t be the most economical driving it on petrol it will be a comfortably easy drive.

Finally if you are only doing a school run or a short trip to town and maybe take cattle to the mart a few times a year or if you don’t plan in going off-road too much then I would say to go for it. The comfort and ease of driving makes it better than almost anything else in it’s class and the running costs and servicing is probably better than most others as well.

I am not a car salesman or in any way connected with Mitsubishi this is just my own opinion on the outlander after owning one with 2 years. At the moment I would be a bit reluctant to buy a full electric for towing cattle or sheep but a hybrid I would have no problem buying one again. Although it would be great if they could increase the range and torque a bit though by adding a bigger battery.