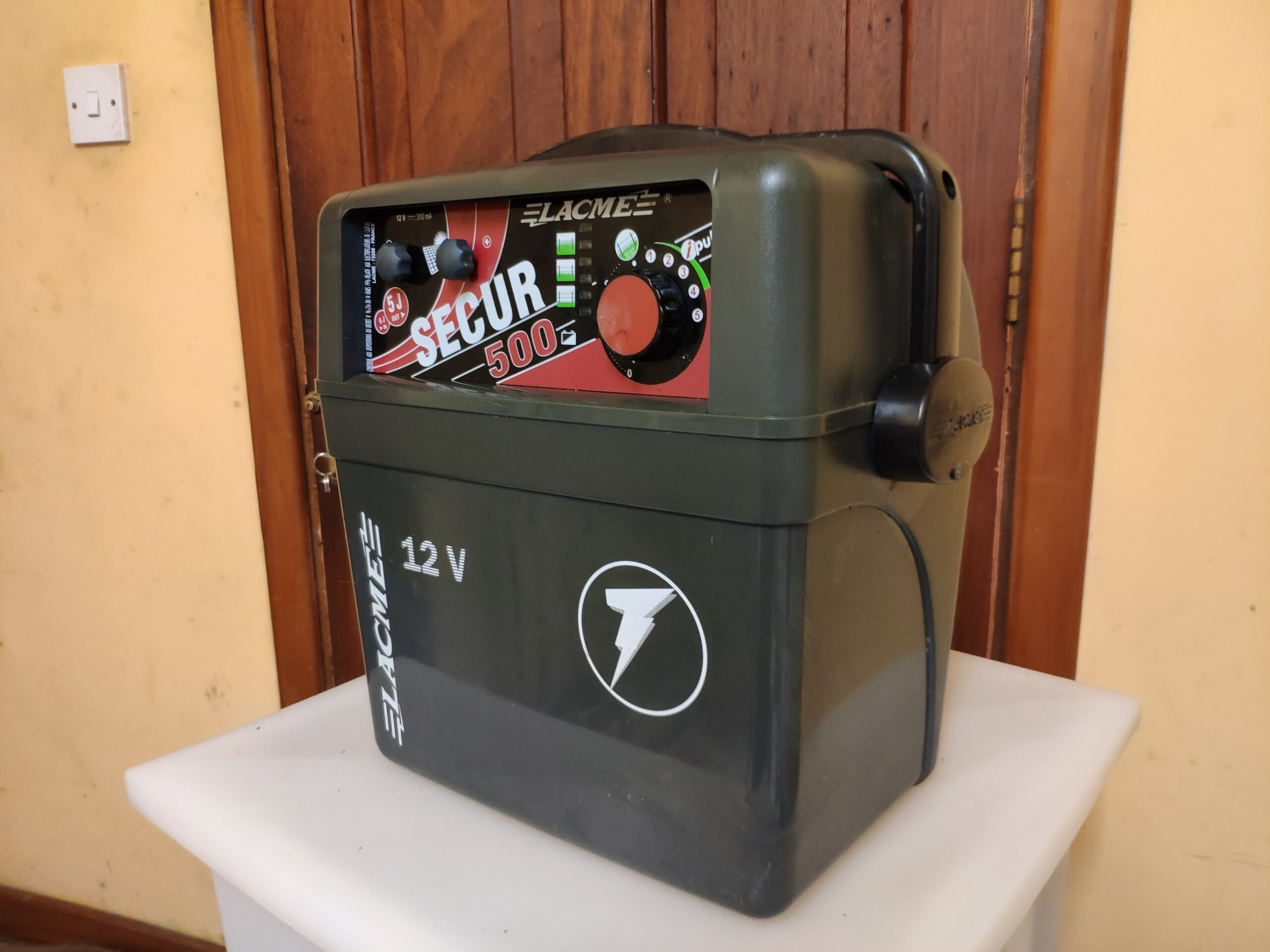 I’m writing this article about what I consider to be the best solar powered fence chargers for an out farm or a farm that doesn’t have an electrical connection. If you have electricity and you are paying a standing charge every month for the connection anyway then you would be better off buying a mains electric fence because a mains electric fence can have more power or joules to burn off vegetation that is growing onto the fence wire.

In my mind joules (which just means energy flow per unit time) is the only true way to measure how powerful a fencer is and while the brand name and price and how convenient the fence is, are all things to consider the first thing I would look at is the amount of joules that the fencer puts out.

Of course everything in its place and if you just want to stop a gap or temporarily run a short fence wire across a field then any cheap battery fence from your local hardware or co-op store will do, like the cheap and cheerful one in the image below that is 0.6 joule and can run off an old 12v car battery or you can have the option to buy a cheap 12v battery as part of the package

When I say an old car battery I mean that if you have an old car or tractor battery lying around that might do as a 12v fencer which doesn’t require much power. A car battery is really designed to give a lot of power over a short period in order to crank the engine and start the car. Which is then topped up and charged every time the engine is running by the cars alternator.

So while an old car battery is not the ideal option one that might not have enough power to start a car might still hold enough power to run a battery fencer if it is only able to hold some bit of a charge. If however you do not have an old car battery lying around then don’t buy one as they are far too expensive for a 12v fence but instead buy a cheap leisure battery or the type of battery that might be used in caravans or boats which are designed to hold power for long periods of time without being charged. Any battery should run a fencer but the more amp hours (AH) the battery has the more power it holds. The power of the AH has absolutely nothing to do with the output power or joules of the fencer but just means the battery can last longer between charges.

If you are looking for a proper fence to run the whole farm then make sure to look at the joules as there are some very fancy looking low output solar fence packages out there with lockable storage build in battery, solar panel etc. which to me is just clever marketing and might be completely useless to you if its not fit for purpose. For example you wouldn’t buy a mini car to tow the cattle trailer so don’t expect a fencer with low joules to run the entire farm.

If you can use an electric mains fence do so but if not then the fencers below are my top 2 and while there are many others (probably enough to do a top 50) on the market the two below are quality high power fencers that will work winter and summer. Personally I would either get a cheap fencer like the one above for a small job or the best I could afford to buy like the ones below for a larger area.

The German made voss helos 4 is very good value for the power you are getting 3.2 joules which they claim to cover up to 24km of fence wire but in my own opinion this is just a claim for ideal conditions with nothing like vegetation touching the wire but is still a good high power fencer that will cover some distance. Most farms will have something growing on to the fence wire eventually which will reduce the shock significantly.

None the less the voss comes with 3 power supply options 12v battery. 230v mains, or solar and also a choice of models with the helos 3,2 and 5 joule or the sirus or Avi at 7.6 joule personally I would go for the 7.6 joule to cope with some bit of vegetation tipping the fence. Add a good earth a battery and solar panel and you would have a good set up for any out farm.

They also supply lockable boxes and metal housing box if you wanted but I used an old fridge with a solar panel attached to the outside of it and while it is not too pretty to look at it does the same job and is cheaper. 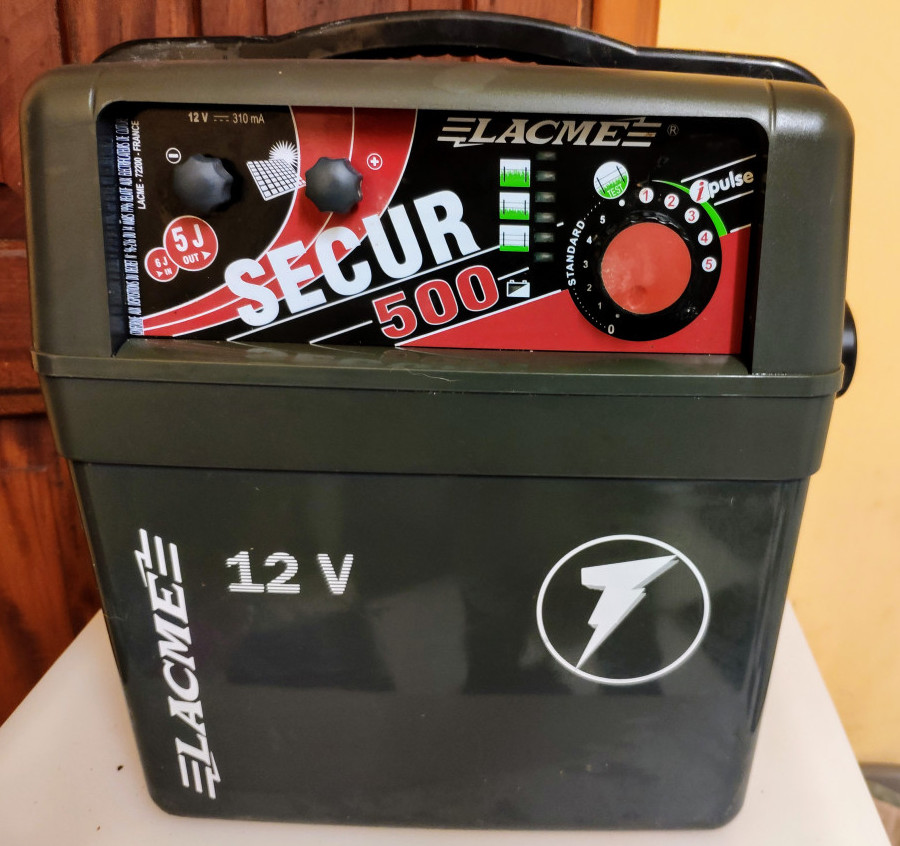 I brought this fencer for my own out farm around five years ago and its been working very well since. The reason I picked this fencer is after many hours of reviewing I felt this was the best on the market at the time. While more expensive than the voss mentioned above the Lacme from France are known for making quality fence products and this 5 joule battery fencer is at the top of their range It has simple connectors on the front to connect a solar panel. The battery seats into the unit which can be simply opened via two clips on the side.

On the front panel there is a dial that can set different power settings and a peak pulse voltage of 15,000 volts. This is an advanced quality piece of kit that can detect when the battery is getting low and automatically switch to Eco mode and reduce the outgoing power to the fence to prolong battery life.

The LED lights on the front panel also make it easy to see when the battery is running low and other features such as testing the power of the fence to see if it is been grounded by vegetation. Another feature on the secur 500 is Ipulse technology that can sense an animal touch and send a pulse at just that moment.

I purchased mine from my selleria the same company linked to on the image above because they have 100% positive feedback and I could not find the same product at a cheaper price anywhere else. It arrived quickly and 5 years later I am still happy with my purchase which is why I am recommending it as the best solar powered fence that money can buy.

It did not come with a battery or solar panel so I used an old car battery that I had. If you are buying one I would recommend a leisure battery like the one below which can be brought online or at your local halfords or motorfactors

The solar panels can be brought cheap enough online too but if you are connecting it straight to a battery make sure to have a solar module included like the one below which prevents the battery from being overcharged in sunny weather. On the lacme fencer I had just a standard panel attached to the connectors on the front and never had any problems.

Now in my experience you can buy something that looks like all of this in one neat package but be careful about what you are getting what wattage is the solar panel what AH is the battery and most importantly how many joules can the fencer put out and finally what does it cost. In my experience it is often better and cheaper to build the package yourself and know you have the quality that you want, even if you only get a bit at the time.

Lacme and plenty other brands do cheaper fencers too but I would be inclined to go for the highest joules output possible if using it for a large area because of the risk of vegetation growing and touching the wire which will reduce the shock of the fence. 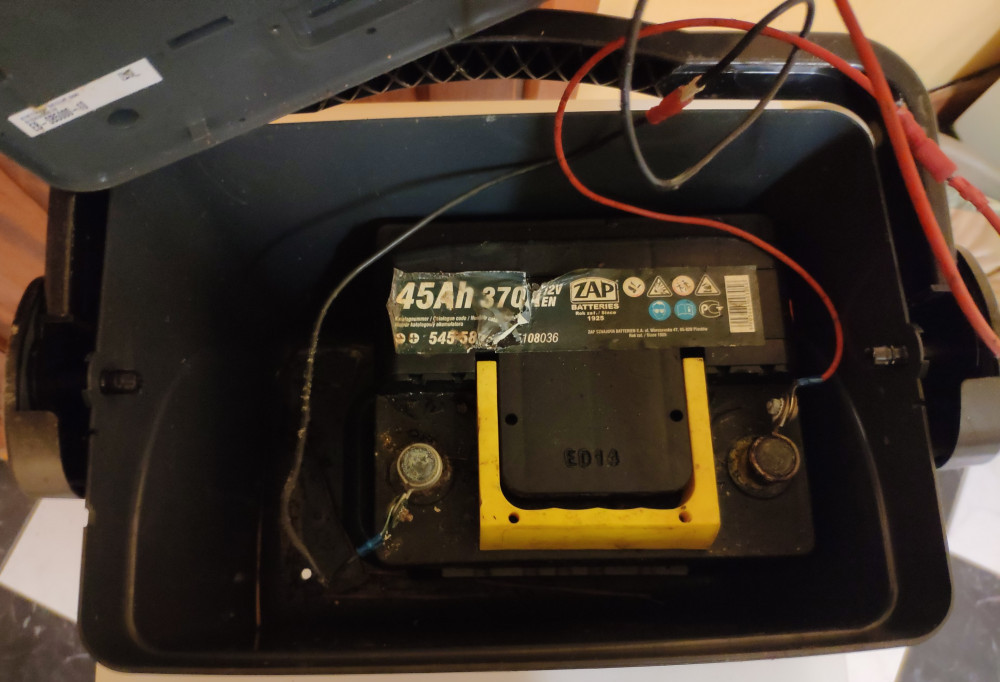