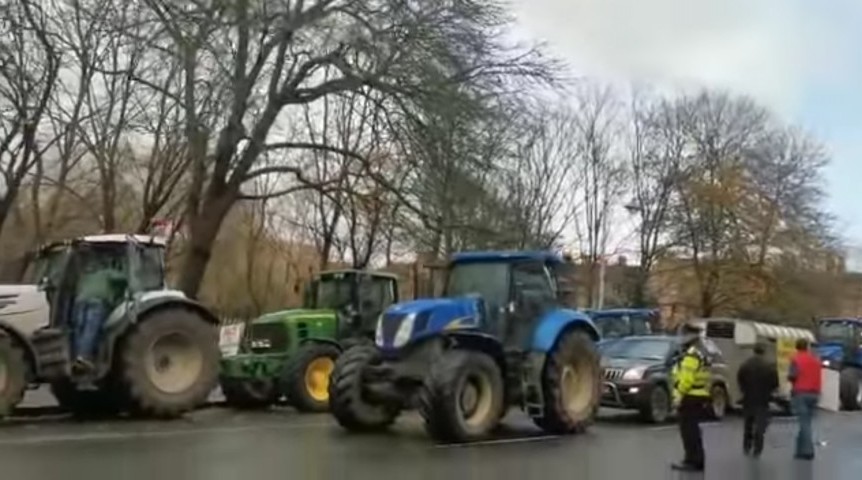 As the farmer protests in Dublin are coming to an end for the time being I feel it would be a good time to explain what they are all about. So around twenty years ago I was in France where I witnessed my first tractor protest but theirs was a bit more extreme than we are used of in this country. The french farmers drove their tractors 4 abreast across the motorway in small groups of around 12 or 16 tractors.

The tractors I think were in first gear doing a whopping top speed of around 10 Kph (walking speed) and the groups were around 10 of 15 kilometers apart and traveling around every motorway in and out of the major towns and cities. After around eight hours stuck in traffic going absolutely nowhere I finally reached a slip road where I could get off the motorway. I got onto a secondary road and even though I hadn’t a clue where I was going I was just glad to be moving again.

To make matters worse the petrol stations in some sort of wider protest or in solidarity with the french farmers picked to same weekend to shut up shop. Low on fuel we reached a small town where we found some place to stay until the protest or our holiday were over. Luckily the blockade ended after around two days and nights and they reached an agreement. The farmers had literally brought the whole country to a halt.

So why would they do such a thing and why should they be left get away with it?

Well I will start with the why. Around 35 years ago in the 1980s a calf had the same if not more value as a calf today. Beef prices has moved a little since then but nothing near the price of everything else diesel price was around 25 pence a liter a house cost 40 to 50 thousand fertilizer cost less than quarter the price that it is today but beef prices have not moved in line with inflation why?

I think it is the policy of the EU governments to keep food cheap which makes some since as most wars and revolutions throughout history started when the population could not afford food, So during the 1980s and 90s EU grants and subsides were given to farmers for producing cheap food usually linked per animal so the more animals a farmer kept the more money he got, so farmers expanded their holdings and increased the numbers.

To stop over production the government then put quotas on the amount of suckler cows a farmer could keep along with milk quotas and got sheep farmers to destock mountain areas to prevent damage to the hill areas from over grazing. This was then replaced with a flat rate payment around the start of the millennium where farmers payment was set by the numbers of cattle they kept at the time.

This payment has not gone up since around the year 2000 and if anything decreased from when the bank collapse around 2008 some schemes like ANC were cut and have not been fully restored since. In 2015 the dairy milk quotas were abolished and dairy expansion was encouraged which flooded the market with dairy beef two years later. That and the uncertainty of brexit has given the factories the opportunity to drop prices further. To make matters worse the cost to buy beef in restaurants and shops rises with inflation while the factories that buy the beef and the supermarkets are making millions in profit every year.

The EU or Irish government does not seem to care about the beef farmer and say they can not increase payments or influence factories or supermarkets to pay anywhere near the cost of production even with the EU payments included. The EU seem happy to let the beef farmers here go bankrupt and import beef from Brazil where the cost of production is lower and less regulated than Europe.

The Farmers used to mostly follow one group the Irish farmers association IFA but this has changed too around the year 2000 when the IFA and farmers blocked factory gates over prices and were then taken to court and fined 100000 per day and with further legal threats had to call off the protest. This move left the IFA unable to do much more than to lobby or ask for more help from our government and in 2015 the IFA was rocked by a scandal when it came out that their secretary general was getting around a half million salary per year as a time when farming was on its knees due to poor prices and in the midet of a countrywide recession.

On top of that farmers were turning on each other looking for what little money was on offer all shouting for their own sector whether Dairy, beef, sheep, tillage or sugar beet many felt that they were not being properly represented by the IFA and large numbers left the IFA. Many other groups started to form to represent their own interests including the ICMSA, ICSA, INHFA, IFDL, and the beef plan movement.

With any of these groups unable to do anything but lobby or ask for a better price some farmers are becoming increasingly frustrated leading to the farmers taking matters into their own hands and having protests like recently at beef factory gates. Promises were made at the factory gates that talks would take place around fair prices and the protests were stood down but talks did not happen which led to the tractor protests in Dublin.

The beef farmers are loosing money every day while everyone else in the supply chain makes a profit and while some have found off farm employment to pay the bills, their are not that many jobs in rural Ireland. As they are tied to their farms livestock and bills it is not that easy to move away either. The only other form of help the can get is Farm assist a social welfare payment as they are self-employed and can not claim job seekers.

Even farm assist is means tested where loan repayments or accumulated debt is not taken into account. All those factors have left some very unhappy unrepresented farmers fighting for their livelihoods.So before you ridicule them too much for causing you the inconvenience to holding up some of your time, just think what brought them to this point in the first place. The last place any farmer wants to be is stuck in traffic in Dublin.