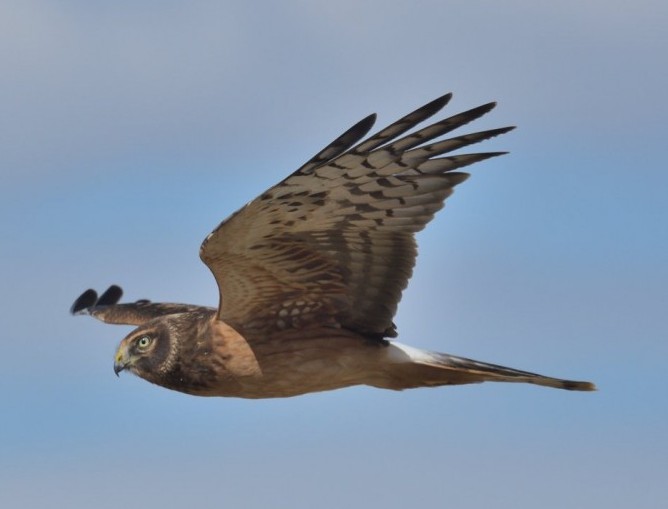 You are probably wondering what my special protected area is well it’s not an area you might be thinking of but a very important area non the less. Back in 2007 the Irish government designated around 170.000 hectares of private farm land as Special Protected Areas or SPAs which was done to protect rare and endangered birds and in my area it was for a bird called a hen harrier.

At the time we had been given assurances that this would not have any impact on our day to day running of the farm and that there was also a farm plan scheme which was in a way to compensate farmers for the designation and to help carry out some work on the farm to protect the endangered bird.

However anyone getting any other environmental payment at the time could not be eligible for the farm plan scheme run by the national parks and wildlife service, I myself was on the last year of the reps scheme, and by the time it had finished the following year the farm plan scheme had been scraped due to cutbacks in the budget as that was a time when banks had collapsed in Ireland and the country was in the midst of an economic recession.

The impact on farmers

As there was restrictions placed on what we could do with the land whether we were part of a scheme or not, they were known as notifiable actions where the farmer would have to get permission from the minister to carry out certain types of farm work like reseeding or spraying weeds or drainage or fencing etc. that in turn made it very difficult to make a profit from the farm due to limits on fertilizer etc.

I was told that it was also very difficult to get permission to carry out work on the farm and severe fines if you did the work without permission.
To make matters worse the department of agriculture had different rules to the department of the environment and they were penalizing farmers for having too many weeds or rushes on their farmland of if the fields were getting poached because they were too wet and needed drainage. So it turned out that in order to comply with one government department you could be in breach of regulations and penalised by another. Damned if you do and damned if you don’t in a way comes to mind.

I saw firsthand the impact that this had on the day to day running of the dairy farm on the ability to grow grass and the effect was reduced milk yield at a time when other farm payment schemes had been scrapped or cut back due to the recession in the country.

In 2011, I applied to plant some of my land not that I wanted to but it was a sort of safety net in a way, in that if would provide some income to pay the bills where there was no other.

The application was refused as just at the time that I had applied the rules were changed again that banned the planting of forestry in SPAs. Although I found this very annoying and unfair at the time, in hind site I fully understand the decision as I believe that forestry is detrimental to the hen harrier and ecological system in upland areas.

It still however had a huge impact on farmers in upland areas as I would have had around 60 hectares inside an SPA if I had been allowed plant all of it at 440 euros per hectare it could have brought in an income of 26,400 for 15 years and they value of the thinning s and forestry afterwards.

With the safety net of forestry gone some farmers that tried to borrow money found a new problem in that with forestry companies or other farmers were not interested in buying farmland with designations and restrictions on it. the land in turn became almost worthless and sometimes the banks wouldn’t lend to farmers because of the value of this land. It was worse for farmers who had to sell for economic reasons or ill health.

I also know that it caused some health problems with some farmers probably due partly to the worry and financial stress that came along with it most of this was never spoken about publicly which could due to the farmers affected wanting to keep the matter private and within their own families.

Finally in around August 2014 a group of farmers from around ballydesmond in north Co. Cork came together to discuss what could be done to change things. The group called themselves Irish farmers with designated land or IFDL for short. They held meetings around the country with farmers who’s land had been designated to discuss the impacts that it was having on them at one such meeting I remember one farmer describe it as the greatest land grab in Ireland since Oliver Cromwell.

I really have to commend the work the committee of the IFDL and what they have done for farmers. Chair members Liam O Keeffe, Kenneth Fitzgerald, Sean Kelly, Morris Flynn, and most of all Jason Fitzgerald. Jason and his team worked relentlessly to highlight the issues farmers in the SPAs were having. They lobbied politicians locally in Dublin and in Europe to try to achieve a fair outcome for the farmers.

They also did a phenomenal amount of work in highlighting the effects of the land designations and had some success in getting some income for farmers in glas + which was worth 2000 euro for the farmers in hen harrier areas for a 5 year period. That reminds me of an election in 2016 when a politician came to my door canvasing for votes and I mentioned to him that it was he that signed off on the SPA land designations and the effect that it was having on farmers.

His answer was that now I could apply to get 2000 euro a year for 5 years, Oh great I replied that will go some way in making up for the 400,000 in forestry premiums that I missed out on for the next 15 years but won’t cover the earnings on clear fell of trees or losses to milk production or the devaluation of farmland. At that point he just shrugged his shoulders and walked away he didn’t get elected again either but that was not just down to me 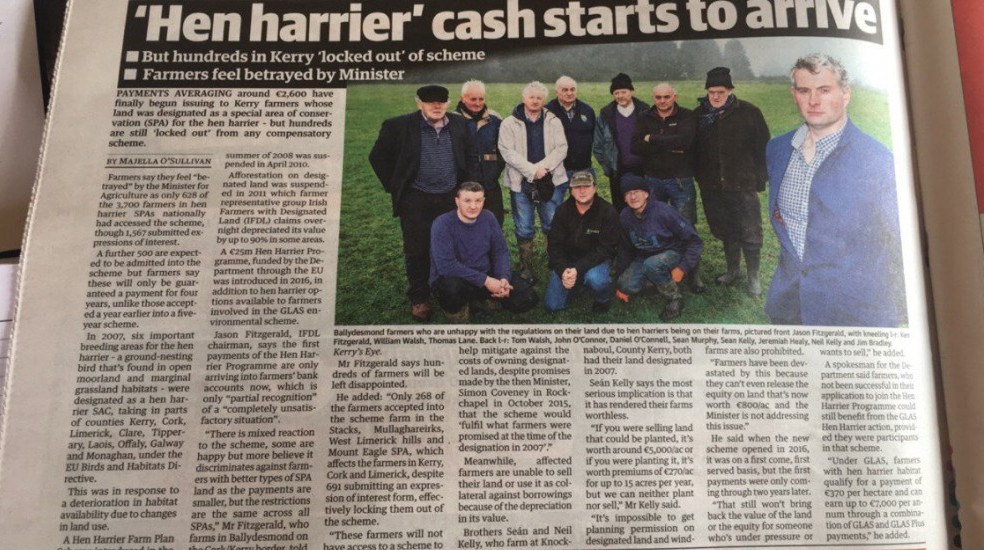 Another success of the IFDL and some TDs that they lobbied was to get a hen harrier project scheme which is a locally led results based scheme similar to the burren project in co Clare. Although none of the schemes come anywhere near what was first on offer (the NPWS farm plan) when we were told our lands were going to be designated or won’t make up for the losses incurred at least it is something. Ifdl were looking for a scheme similar to forestry that would last for 15 years and be paid on a per hectare basis which was promised but never came to pass. 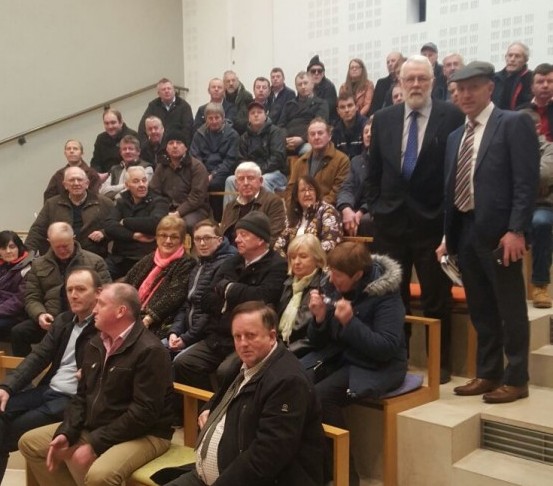 This article is not written to complain about the hen harrier itself or about the rights or wrongs of forestry or the land designations but simply to highlight the effects that it has had on some farmers in the area. I will try to write another article about the bird itself and how things are affecting it.

I called it My special protected area that is because it is a family owned farm that was passed down to me from my late father and even if some people might like to turn it into a wildlife reserve and stop me from farming it in the way other farmers can with their farms the fact remains that it is still in my ownership as I did not sell it or give it away.

It will hopefully remain in my ownership until it is passed onto it’s next owner who hopefully will look after the farm and it’s wildlife as I have done. I know farmers in SPAs will continue to look for a deal even 14 years on and some in the government that hope we will shut up and go away but as long as there is injustice someone will speak up about it and the farmers in SPA areas are not going anywhere.

Farmers are often referred to as caretakers of the land but sometimes the caretakers need to be taken care of too. My hope is that the hen harrier project scheme can be built upon and when the glas scheme ends next year that it will be replaced with a proper new long term environmental scheme that will finally deal with the issue of land devaluation.

13 thoughts on “My special protected area”