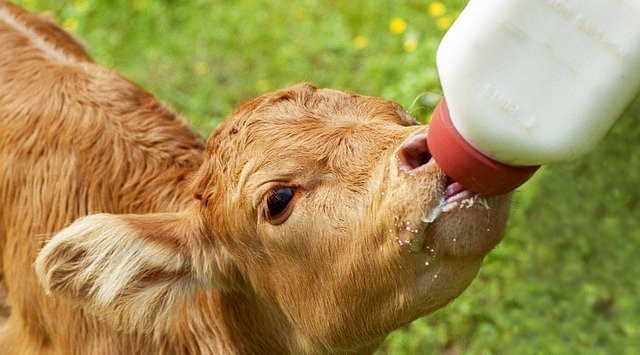 I thought I might give some tips for bottle feeding calves this is based on my opinion and experience only but might be useful for somebody that’s new to it. The first and most important thing to any newborn animal is good quality colostrum and that should start before the calf is ever born.

To have good quality colostrum the calves mother needs to be well-fed especially if it’s a high maintenance breed like a dairy cow that puts her energy into producing a large volume of milk. If you haven’t tested the quality of the silage or if you are not sure if it is top quality then I would suggest feeding the cow for at least 3 weeks before it calves.

Something like a good quality ration or even a mix of 1kg of soya and 1kg of maize meal you don’t need to over feed them either but just enough to keep their energy levels up in order for them to calve easily and have good quality milk for the calf.

I know some might be worried about big calves and difficult calvings but I am not suggesting feeding them buckets of meal all winter but just a little maintenance feeding for a few weeks before calving. Personally I would avoid hard calving bulls anyway as I don’t think it’s worth loosing a cow, so when I was using a beef bull I used something like an Aubrac or Angus for piece of mind.

When the cow has good quality colostrum for the calf then that will reduce a lot of other risks of illness like scour etc. to the calf after birth and if the cow is well-fed she will have more energy at calving which should lead to fewer problems when she is giving birth.

A cow calving outside during summer or Autumn will get all the energy that they need from grass but if calving in late winter or spring I think unless you have very good quality silage then the cow would benefit from some extra feeding. 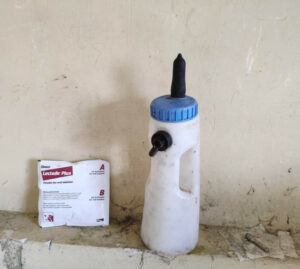 Once the calf is born it is important to get at least 2 liters of colostrum milk into it within the first four hours of life. I know that’s not always practical in real life as they can give birth in the middle of the night but the sooner you can get that first 2 liters of milk into the calf the better. After the calf is born the have the ability to absorb the cows antibodies from the colostrum and every hour that passes that ability by the calf is reduced and the more risk the calf has of picking up an infection that it has little or no resistance to.

I find the best way to feed a new calf is with a bottle like speedy feeder and to place the nipple of the bottle in the calves mouth and by placing my two index fingers under the nipple and applying slight force to squeeze the milk from the nipple between my fingers and the roof of the calves mouth.

After the first few squirts of milk the calf usually gets the taste for it and will start sucking and finish the bottle by himself. Its important to try to get 4 to 6 liters into the calf in the first 24 hours of life.

After the first feed with a bottle I would try to switch them to a nipple feeder that you hang over the gate this is usually done by raising the nipple of the bottle up to the same level as the nipple feeder while the calf is drinking and then using one’s fingers to quickly switch nipples.

It is a bit unnatural for the calf to be stretching it’s head too high to suckle so if the feeder is hanging so the nipple is around head high to the standing calf it will help make the process easier. Some people train the calf instead to drink out of a bucket which you would want the patience of a saint for. Having tried both methods for many years I found training the calves to nipples much faster and easier. 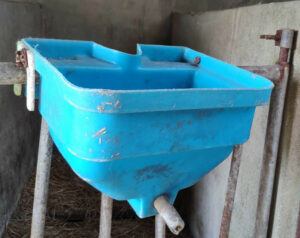 Hygiene is another important issue for any newborn calf and the pens that newborn calves are going into should be thought of as like a maternity ward in a hospital spotless and disinfected with a clean bed of straw.

Moving to a group pen

After a few days when the calf has gotten enough colostrum and is drinking on it’s own it should be moved out into another pen with a group of calves. If I was putting them on a six nipple feeder I would put around 5 calves in the pen. This very much depends on your own setup.

Some have automatic calf milk feeders at this stage, some of which work very well because they can feed the calves little and often like being with a cow but can be expensive costing up to 10 thousand euro for some makes or models. Some hay and fresh air is also important to the calf at this stage.

The hay will help with the gut development and fresh air and clean straw will help with keeping the bug count down. Personally I think if you can’t keep clean straw under them then you are better off with no straw at all. When straw gets wet and dirty it is just a breeding ground for bugs and bacteria. If you can find the smell of ammonia or urine when you walk into the house trouble is not far behind.

This can cause a lot of problems especially around march when the outside temperature changes a lot and the weather starts to warm up a bit during some days. 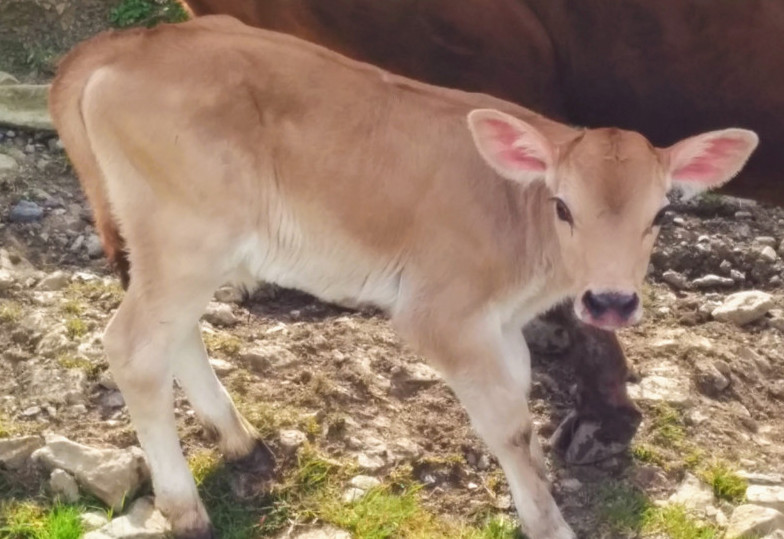 Move to outside yard

When the calf is around three weeks old I would try to let the calf have some access to the outside like a yard with a shed for shelter at this stage they could be fed with feeders hung over a gate in the yard and it would also be a good time to introduce them to some small bit of ration and I find once a day feeding with milk suits them fine. That will also help them develop a taste for ration and hay.

This is also a good time to introduce them to an electric fence even a cheap battery fence will do like the x stop which is first one mentioned on this page. I think it is good practice to have a place that the calves can run around outside and have some experience of what an electric fence is before you let them out on a field. The fresh air is also good to keep them healthy and it’s a good place to train them to come to the gate outside for milk.

Once they are trained to the fence and drinking and eating well I would move the strongest calves outside to a small sheltered field with a gate at the gap where you could continue to feed them milk. As well as it being a small field I would recommend fencing off a small section of it to begin with using a temporary tape wire and plastic fence or pigtail posts

The first batch of calves you let out will almost certainly run through this but it’s all part of the training. In my view letting calves out into a big open field is only asking for trouble as they tend to keep going when they get to the end of it in a kind of blind madness. If you can keep calves in a small area at the start and keep them coming to the field gate for milk you will end up with very quiet calves that will hopefully grow up to be quiet cows. 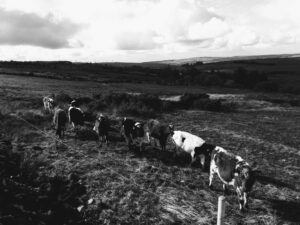 The trick is to get them following you at a young age and keep them following you as it’s a hell of a lot easier than you follow them. When you are introducing new calves into the field it would be good practice to introduce small numbers at a time. For instance if I had twenty calves to go into a field for the first time with other calves I would bring 5 in the morning and 5 in the evening and the same the next day.

Smaller numbers seem to keep the herd calmer rather than letting 20 in one go and maybe see them all taking off to the neighbors. I would keep them on the milk once a day and calf ration when they are out in the field as they will grow well and stay very quiet animals.

When you are satisfied they are strong enough I think maybe 8 weeks old although some people wean them off milk at 6 weeks Id start adding water to the milk or give them the first washings from the parlor line to the tank and increase the ration that they are getting. As they generally don’t like when you take their milk away so I think it is better to do it gradually if you can. Any small calves could be separated from bigger one’s and kept on full milk for a while longer. 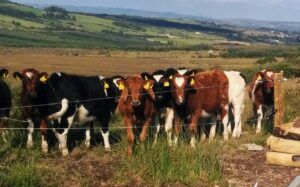 As the year moves on I think that it is important to try to keep feeding some bit of ration if you can and try to keep fresh green leafy grass with them too. Around June grass can get steamy as growth outstrips demand so try to budget grass the same as the cows and take some out for bales if necessary to keep young green shoots of grass under the calves.

Calves like all baby animals are most vulnerable and particularly in the first 7 or 8 months so it pays to look after them during this time and by feeding them some bit of ration it allows you to keep a close eye on them daily. When the calves are on poor quality grass without supplementary feeding they can go down hill quickly. So in my view keep them thriving and keep them quiet and daily feeding should ensure both. 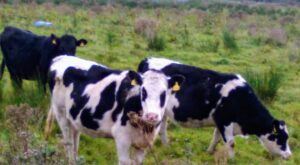 The only other to cover is health a blackleg vaccination injection doesn’t cost much and will more than pay for itself if it saved a calf. Lung worms is another common problem with calves and should be injected or treated as soon as they start coughing.   Fluke is not generally a problem in young calves but they could be done over the next winter.

This system might not work for everyone because every farm is different and has a different system but all I can say is that it worked well for me. feeding bottles and milk feeders can be purchased at most hardware stores or I have some images you can click on this page where they can be purchased through Amazon.

One thought on “tips for bottle feeding calves”